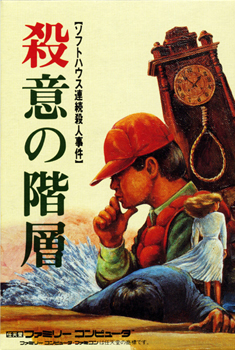 Satsui no Kaisou (殺意の階層, Satsui no Kaisou? lit. Hierarchy of Murderous Intent) is an adventure game developed by Hyperware and published by HAL for the Famicom. It was never released outside of Japan, or translated into any other language. It is a mystery game in which you take the role of a boy who is trying to solve a murder. Players must speak with the right people, say the right responses, and investigate the right things at the right time to complete the game. It is very difficult and players, even those with good knowledge of Japanese, often find that they need a strategy guide to clear the game.