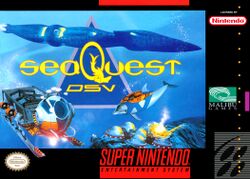 The overworld is presented in an isometric view. In the overworld you can attack enemy subs, replenish supplies, receive "missions" from UEO Command, and move the ship to the location of the "missions". The "missions" are presented in side scrolling shooter style levels where you can pick from 4 vehicles, a remote probe and a trained Bottlenose Dolphin with an Aqua-lung. Some missions require the use of more than one vehicle.