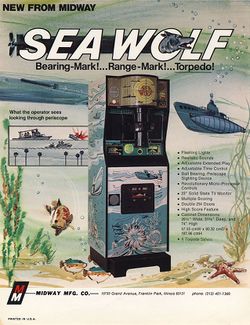 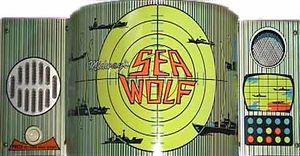 Sea Wolf is a light gun arcade game that was released by Midway Games in 1976; it uses an Intel 8080 microprocessor (running at 1.9968 MHz), and the player must use a "periscope" to take up control of a virtual submarine with a single button to make it fire torpedoes at the various enemies' ships passing across the surface of the ocean (at the top of the screen). The torpedoes are launched from the bottom of the screen, and will move upwards to hit the enemies' ships (but, may get blocked by the mines floating at different depths of the ocean) - and the submarine can fire out five torpedoes before it automatically reloads (on the cabinet, two of the transparencies inside that periscope were a display of remaining torpedoes and a red reload light). The game will also be extended if you reach a certain amount of points before the timer runs out, depending on what the arcade owner has set it to, and was colorized for ports to the Bally Astrocade, Commodore VIC-20 and Commodore 64 systems (first in 1977 in the case of the first one, and then in 1982 in the cases of the second and third ones).

A sequel named Sea Wolf II was released in 1978; it was the first game to run on Midway's then-new Astrocade hardware, allowed two players to play simultaneously (indicated by the cabinet having two periscopes) and could display its on-screen text in 4 languages (English, French, German, Spanish). It was also ported to the Atari 800 system, along with (just like this one) the Commodore 64, in 1983.