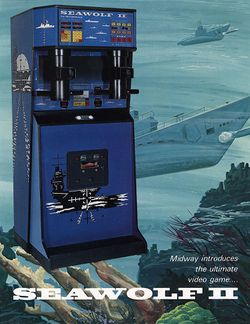 Sea Wolf II is a first-person shooter arcade game that was released by Midway Games in 1978; it was the first game to run on the company's then-new Astrocade hardware (a Zilog Z80 running at 1.789773 MHz, with a Bally Astrocade sound chip running at that same speed), and, as the name suggests, it's the sequel to Sea Wolf which had been released two years earlier. The gameplay is fundamentally the same as that for its predecessor - the players (two can play simultaneously this time), must use two "periscopes" to take control for two virtual submarines, with a single button to make them fire torpedoes at the various enemy ships which are passing across the surface of the ocean (at the top of the screen). The torpedoes are again launched from the bottom of the screen and will move upwards to hit the enemy ships (but may again get blocked by the mines floating at different depths of the ocean); both of those submarines can again fire five torpedoes before they automatically reload (as in that original game cabinet, two of the transparencies inside both of the periscopes were a display of remaining torpedoes and a red reload light). The game will again be extended (for both players) if either one reaches a certain point amount before the timer runs out, depending on what the arcade owner has set it to, and can display on-screen text in four different languages (English, French, German and Spanish) - and like the original it was later ported to the Commodore 64 system in 1983 along with the Atari 800. It's also described as "the ultimate video game" on the promotional flyer given that it was released before the advent of Pac-Man, and may also have been the first arcade title to make extensive use of colour (after some older games had made limited use of it, including Atari's Sprint 8, released in 1977 and being the first title from that company to allow up to eight players to play simultaneously - and upon the same cabinet as well).