When you exit the cave, you'll be in a shaded forest. Creatures that strongly resemble Mushbooms will be working about, but don't worry, they are friendly and will not harm you. You can speak with them, and they encourage you to go speak with King Truffle. Follow the path as it leads down and to the left, before climbing back up to an entrance to a new area.

You will arrive at Fung Castle, home of King Truffle. Continue up the path until you reach two doors. Be sure to visit the item shop here, as they sell Fancy Overalls which offers a substantial defensive boost to every character over what you may already have equipped. You should also buy the Steel Cap for the Boy. Equip your new items, and exit the shop. Step into the building to your right. There you will find Watts chatting with a mushroom on the right. Speak with him to upgrade any weapons you may still have orbs for.

When you're ready, step through the door above to reach King Truffle's chambers. Everyone inside will have a lot to say about White Dragons and Mana Beasts. Speak with the king, and he will address you as the legendary knight. He will share a prophecy about a knight riding a white dragon, and how recently people saw a white dragon fighting a snake. He tells you to explore the cave, and then he'll tell you where the palace is. And he has a gift for you upstairs, so climb the steps to the right. You'll find a chest up there with the Javelin's Orb. Return to Watts to use it. By now, all of your weapons should be at level 3.

From Watts, walk to the right. The door below leads to the caves, while the door above leads to an inn. It's a good idea to stay at the inn to restore your power and save the game. Then head down to return outside, and follow the path up to another entrance. This entrance will lead to another shaded forest with plenty of enemies to fight, like Crawlers, Steamed Crabs, and Water Thugs. Make your way to the upper right corner of the map to reach the cave. 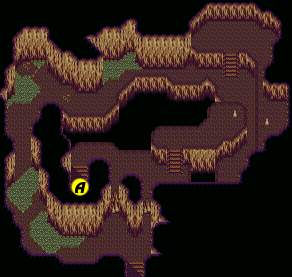 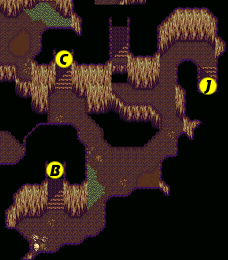 Climb the stairs at the entrance, and you're likely to encounter a Pebbler when you reach the next level. You'll also find Kimono Birds and Nemesis Owls here. Remember to focus on the Kimono Birds before they summon any more Pebblers. Follow the path to the left, then up and around as it heads back to the right. You'll have to climb the stairs and continue right and down, where you'll find some pegs in the ground that you must use the whip to cross over the gap. This will let you continue to the right until you find the stairs that lead down to the next level.

Head to the right and use the whip again to cross over the gap. You'll see some steps below. You can continue right, but all you'll find is a dead-end, likely occupied by Water Thugs. Head down the steps, and step onto the next floor. Focus on removing the Kimono Bird before taking on any Pebblers. There are a few exits from here, but one in particular, the stairway in the middle, is inaccessible. That leaves the stairs on the far left or right, but the stairs to the right will lead to a dead-end for now, so take the stairs on the left (marked with a C). 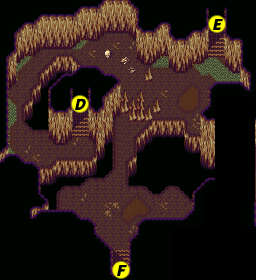 On the next floor, follow the path to the left to another set of stairs. Follow them down to the next floor, to a path that circles up and around to another flight of stairs on the right. Take those up, and take on the Pebblers that you encounter. Behind them, you'll find a Crystal Orb. Cast the Girl's Analyzer spell on it to discover that Gnome's magic will work on it. Have the Sprite cast Earth Slide on it, and you'll hear a rock fall into place.

About face and return to the previous room. A path will have opened up, allowing you to explore the section below. Clear out any enemies you encounter, as you make your way to the steps at the bottom. In the next room, carefully remove the Kimono Bird, followed by the Pebblers, and then step through the doorway on the left, where you'll encounter a boss battle. 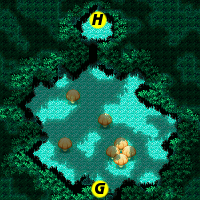 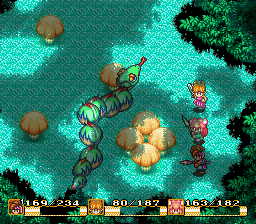 The Great Viper can be a very challenging battle if you're not good at leading your party away from where he is going to slither across the ground. One of the Viper's most effective attacks is the ability to shrink you in size if he crawls across you. Getting shrunk not only makes your attacks less effective, it significantly weakens your defense. If the Viper gets another attack on one of the characters while they are small, or worse yet, stops on top of you, scoring another hit, he can do massive damage to your character. For this reason, it is extremely important that you stop the battle as soon as this occurs, and use the Moogle Mallet which you hopefully obtained from the Dwarf elder before you flew to the Upper Lands. If you don't have this, you will have to rely on the Girl's Remedy spell, or to simply wait out the effect of the shrinking. The Great Viper can also cast Gem Missile on one of your players for a good amount of damage. He happens to be weak against air magic, so you may wish to cast Air Blast at him as often as you can throughout the battle. The Great Viper tends to slither back and forth in diagonal directions, but he can still be fairly hard to predict, stopping occasionally in the middle of the forest before continuing on. When he disappears off the side of the screen, he will reappear from the same general location. Continue focused attack on him, while at the same time trying to limit your exposure to getting shrunk. 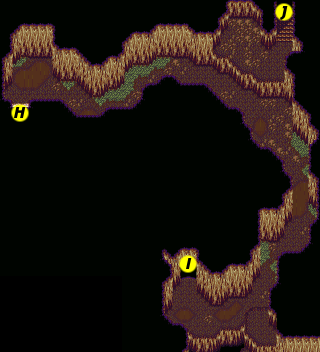 Once you defeat the Viper, you'll obtain a Sword's Orb. Head up through the top of the forest and you'll return to the cave interior. Follow the path as it winds its way around and down to another door. Step through the door, and sitting in a shaft of light, you'll discover a baby white dragon. It appears as though its parents were defeated by the Viper. The Girl will be concerned for its well being, and suggests asking King Truffle what to do. King Truffle agrees to raise it and care for it. He decides to name it "Flammie." He lets you know that the Cannon Travel center in Upper Lands is restored, and that the Fire Palace can be found in the Desert of Kakkara.

It's a good idea to stay at the inn once more before setting off. Remember to talk to Watts to upgrade the sword. Then exit out of Fung Castle, and continue south on the path that lead you here. Follow it back around to the small section of cave that connects Matango to the Upper Lands. Return to the last section of the Upper Lands, and explore the path to the east that leads to the Travel Cannon center. Talk to the man, and he'll offer to send you to Either Kakkara Desert or Ice Country. Since King Truffle mentioned the desert, choose that location and blast off.