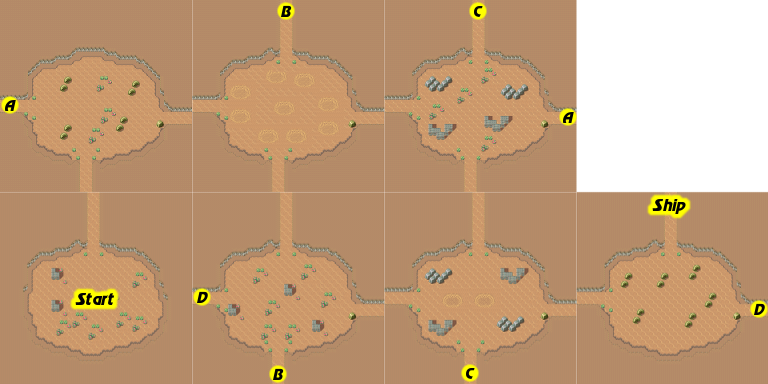 You land in the middle of a baron desert. With no other options, you must set out in search of a town. From where you land, the only option you have is to exit north. In the next screen, you will encounter Pebblers and a type of one-eyed scorpion known as a Sand Stinger. Fight as many of them as you are inclined to for their experience points. From here you may move East or West.

Once you move to another screen, you'll find more of the same. However, your options open up and you typically have four directions to choose from. You'll fight Sand Stingers and Pebblers in many screens. In others, you might find Pumpkin Bombs or Spider Legs. Spider Legs are a type of creature that burrows underground, typically beneath quicksand, and reach out of the sand with its legs to grab and attack you. They are stationary, but they can cast Earth Slide on you wherever you go. These can be dangerous enemies if you get too close to them. However, if you stay a safe distance away, they won't bother you, and they actually make good targets if you are trying to level up your magic.

You shouldn't wander around the desert for too long, however, since you won't be able to find an Inn anywhere unless you find a way out of the desert. The secret to escaping the desert is to actually travel in a circle. Since North and South exits are connected every two screens, any combination of the following movements will trigger an event: NWSE, NESW, NWNE, or NENW. If you circle back to the starting location, you will arrive in a region where you notice a ship up ahead.

Deal with the Pumpkin Bombs and Spider Legs in the area, and advance to the screen above. You'll board the ship. The guards will be suspicious of you and assume you're spies. The Commander will appear and take pity on you, as he assumes you are merely lost. He allows you on board, but he splits you up, giving the Boy and Sprite jobs, and taking the Girl with him. 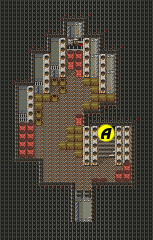 When the game continues you will be in control of the Boy, apart from the rest of the team in the engine room. It turns out that all captives are forced to work in the engine room. In the engine room, you'll meet a pirate named Sergo. The guards won't let you out, but if you talk to Sergo, he'll agree to help you escape by causing a distraction. He'll tell you to speak to the guard, and as you do, he'll yell fire and divert the guards' attention, allowing you to climb the stairs. 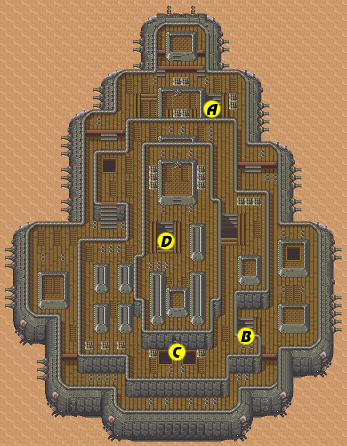 You'll now be free to roam the ship. Once on the deck, first head to the left. Follow the path around until you find some stairs that climb higher up. Use them and head back over to the right to find another set of stairs that lead down into a level below the deck. Follow the hallway and you'll find the door to the kitchen, where the Sprite was assigned to make food. Step inside, and you'll discover that the Sprite has in fact eaten all of the ships food, causing the other occupants to kick him out. Speak to the Sprite to get him back in your team, and then exit.

Retreat back up the hallway and up the stairs to the deck again. This time, stay on this deck level and head down to the bottom of the ship. Between two dark squares, you'll find a door. Step through, and you'll see a hallway that splits in two. The stairs to the left take you to the highest section of the deck. The path to the right leads to a door (marked E) that guarded by two soldiers. Approach them with the Sprite and he'll tell them that rats ate all the food on the ship. This causes them to panic and leave the door unguarded.

Step though, and you'll find the Commander trying to coerce the Girl, who steadfastly refuses to obey. They begin to fight when Meria, Commander Morie's grandfather steps in and interrupts. The Girl will be happy to reunite with you. When Meria realizes you are escapees, he calls the guards, but at the moment, the Empire attacks the ship.

You'll be brought up to the top deck, where you'll see Empire soldiers. Standing at the helm is none other than Geshtar. When you speak to him, he'll challenge you to a fight in the desert; you three on foot against him on his mech bike. 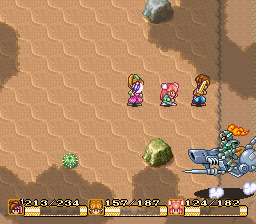 The Mech Rider has a few tricks that you'll have to contend with. It's primary advantage over you is its ability to zoom quickly across the screen from left to right, or right to left. As it does, it will knock over anyone in its way. To make this worse, Geshtar likes to cast Speed Up on himself to make the bike even more lethal. As it resituates itself to drive back the other way, it can launch heat seeking missiles at a member of you party for a good amount of damage. Your goal here is to get to the side of the screen that the rider has crossed to, but stay above or below it. Until it rises or drops to your position, it is unlikely to drive away. This is your opportunity to have the Sprite cast offensive magic on it. It's not particularly vulnerable to any element, so any spell will do. When you've run out of room, or out of magic points, be sure to whack the bike with your weapons before it drives away and repeats the process from the other side.

Once you defeat the Mech Rider, you'll obtain a Whip's Orb. You'll then appear in the middle of a desert field with all of the ships occupants. The Empire will no longer be in the area. Morie will lament the loss of his ship, but Meria will apologize for their behavior upon learning that you're friends with Jema. Sergo will also be present, and offer to give you jobs if you need them. The soldiers will inform you that to reach Kakkara Village, you should head north, and then west to reach the Fire Palace. To leave, you must speak with one of the soldiers who tells you that a rescue party is coming. He'll ask if you're leaving. 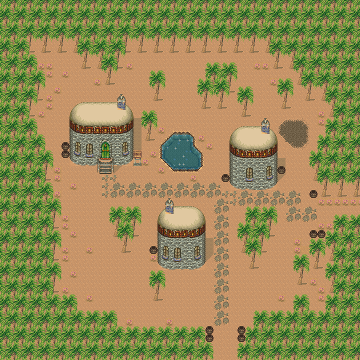 Say yes, and you'll reappear right in the middle of another desert section. However, this time if you head straight North, you will indeed find Kakkara Village. Unfortunately, it's not the best state to help you. Everyone is concerned that the wells have run dry, and it appears that Salamando has disappeared, and the fire seed has been stolen.

However, there's still some value to be found in the village. First, you can use the Inn to save your game. Second, Watts is here to upgrade any weapons you might have orbs for, like the Whip. And third, there's a merchant in front of the right building. He sells some rather expensive protection, but it's well worth the asking price. As long as you can afford it, buy Raccoon Caps, Silver Bands, and Golden Vests for everyone. If you find yourself light on cash, consider buying Chest Guards and Golden Tiaras for the Girl and the Sprite instead.

Once you're finished here, there's little else to do besides wander the desert and visit the Cannon Travel center to the right of the village. The center can send you back to Matango, or on to Ice Country. You'll be hurled over an ocean and land squarely in the middle of a frozen villa.