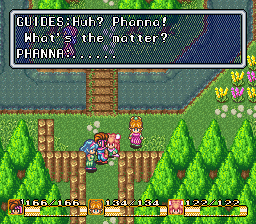 You won't find any sign of Jema around the Kingdom of Pandora, inside the castle or out. However, as you approach the ruins, you should notice one particular blue haired girl. Her name is Phanna. If you try to talk to her, however, she will simply vanish. The boy will be very alarmed by this and suggest that you investigate the ruins to the south. 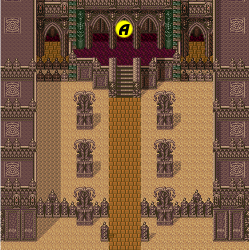 Follow the path as it heads to the right and back up to a courtyard, where you'll find acolytes and village members alike, wandering around in silence. Phanna will be by the steps near the top. The girl will try to talk some sense into her, but she will ignore you and proceed inside. Then the girl will literally shove the guards aside and insist that you hurry. 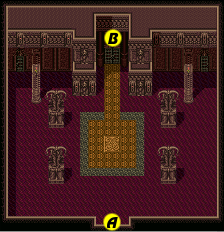 Step inside, and you will meet a new enemy, the Tomato Man. Like Goblins, Tomato Man can summon other enemies to fight alongside it. In Tomato Man's case, he summons Zombies. As always, no more than three enemies can appear on the screen at one time, so a single Tomato Man can summon two Zombies, but two Tomato Men can only summon one Zombie between them both.

Unlike Goblins, Tomato Men have amazing defense. This defense allows them to shrug off most basic attacks. It usually takes critical hits, charged attacks or magic spells to deal damage to them. They don't have a lot of health, so only a few charged attacks are required to defeat them. The Sprite's Gem Missile spell is particularly useful. Focus on them before dealing with the Zombies they summon.

The room that you arrive in has three exits at the top. The two side doors lead to small rooms where you will encounter Evil Swords. These animated weapons come to life when you get close to them and attack you. They are able to cast Moon Saber on themselves, which gives them the ability to absorb health from the damage they do to you. You can also encounter Tomato Men in these rooms as well. Because they lead nowhere and contain no treasure, and because a Tomato Man will reappear in the original room, it is not recommended that you explore these rooms unless you are trying to obtain more experience points. 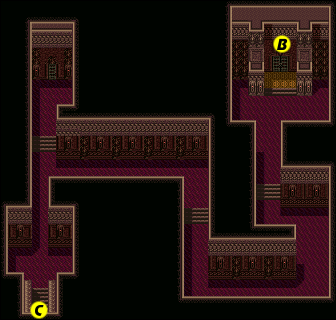 Climb up the center stairs and head through the door. This will lead to a small hallway (not pictured) with a set of steps that climb to the next floor. Two Chess Knights will be waiting here for you. On the next floor, you must walk through a long winding hallway. You will encounter Evil Swords, Tomato Men, and Chess Knights as you make your way to the left. Remember that the Evil Swords can cast Moon Magic and drain your health. 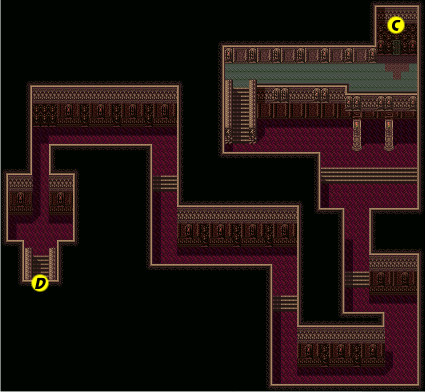 On the far left side, the door above leads to one of those dead-end rooms containing Evil Swords and a Tomato Man, so avoid it unless you feel it's necessary to gain more experience. Focus on heading down to the stairs below which lead to the next level. It's quite a lot like the previous level, but longer. At this point, if you have been relying on the sprite's magic to defeat the Tomato Men, you may be running short on MP. Remember that you are not obligated to fight them, or the Zombies they summon, so feel free to run past them when they become to tedious to fight. 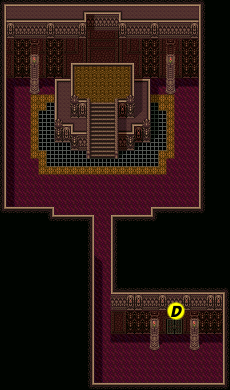 Continue on to the next floor, walk to the left, and then up where you'll find an alter surrounded by acolytes, none of whom will talk to you. Climb the steps to speak with none other than Thanatos himself. Your group will demand that he return Phanna and Dyluck. He will respond by telling you that he has drain Phanna's energy and made her his servant. He will also show you Dyluck, who is apparently very difficult to control. Then he will trigger a trap door and send you to a fight with a boss. 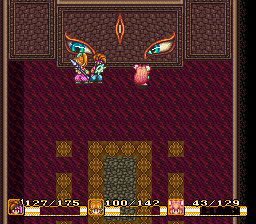 Wall Face is literally a wall composed of three eyes. The two outer eyes are support eyes, while the center eye is the actual boss that you must defeat. The eye on the left side of the screen has limited attack abilities, but it's main function is to heal damage done to the center eye. For this reason, it's important to take this eye out early, in order to prevent all the damage you do to the middle from being wiped away. The eye on the right side of the screen is much more formidable when it comes to attacking. It can cast Undine magic like Freeze and Energy Absorb. Taking it out sooner than later will reduce the amount of damage you suffer in battle. The center eye cannot be struck while it is entirely shut. It also has one other trick: it can revive either of the two eyes that you've defeated.

If you manage to shut both the left and right eyes, the boss will go into a final phase where, as a wall, it pushes you closer and close to a set of spikes at the bottom of the room. If it succeeds in pushing you all the way down, your entire party dies instantly and the game ends. To avoid this fate, you must rigorously attack the center eye as frequently as possible, in an effort to defeat it before you are impaled on the spikes below.

If the Sprite still has magic left, the center eye is particularly vulnerable to Gnome magic like Earth Slide and Gem Missle. Naturally, you'll want to use the girl's Undine magic to heal damage that your party receives before you lose anyone. When not casting magic, make sure your entire party is targeting something and attacking as much as possible. Ideally, you should aim to take out the eye to the left, then the eye to the right, and finally the eye in the middle. It's possible to focus all of your attacks on the center eye in an effort to destroy it before attacking the other eyes and having to deal with the spikes, but unless you're very strong, the interference from the other two eyes makes that rather difficult to accomplish.

After the wall is defeated, you will receive a Bow Orb. Then you'll return to the alter with Thanatos, Phanna, and Dyluck. Thanatos will release the villagers, but keeps Phanna and Dyluck hostage as he disappears. You will then be free to roam around the alter. You will run into Jema, who is surprised to see you after waking up. He ponders why Thanatos was sent and why he was stealing energy from people. He says he is heading to the underground palace, and instructs you to visit Luka.

Back in Pandora, everyone will have returned to normal, and they will be grateful for your assistance. The armor shop will be back in business, and you can buy Cobra Bracelets for 280 a piece for all three characters. This grants a two-point defense enhancement over the Power Wrists. Visit the castle and find the king in his chamber behind the throne room. He will be overjoyed with your success, and grant you access to the treasure room in the lower left corner. In there, you will find six treasure chests. Four of them contain 50 GP each, but the other two contain a Sword Orb and a Spear Orb. Be sure to grab them before you leave and head to Luka's.