When the game begins, Randi (the main character) is following two boys from Potos Village as they cross a bridge over a waterfall. Suddenly, Randi falls from the bridge and lands in the water below. The path back to the village is overgrown. and the only way to get back is to find some kind of knife or sword to cut the undergrowth away. 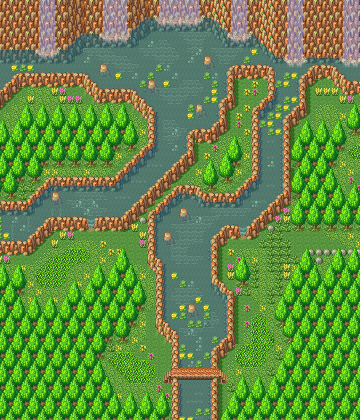 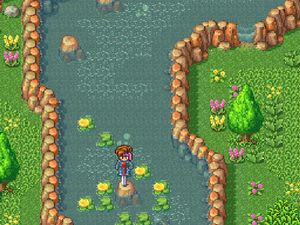 Once you stand up, head down to find an exit from the water bed. Hug the edge of the river as you travel south along the small path. You will suddenly hear a voice calling your name. Cross the small bridge over the river, and go to the north (notice the sword on your left). You will pass the undergrowth, where Randi mentions that he needs a tool to cut a path to the village. Continue north and enter the water again. Turn to the west and then head south until you run into the sword stuck in a stone - the Mana Sword.

Stand directly above it, and press

. After being coaxed by the voice, Randi pulls the sword out of the stone and a ghost appears for a few seconds. The ghost will explain that he summoned you, and mention the sword before fading away. With blade in hand, return to the undergrowth and cut it away by pressing

. Cut a path through the tall grass to the right, and follow it until you exit this section of the falls. 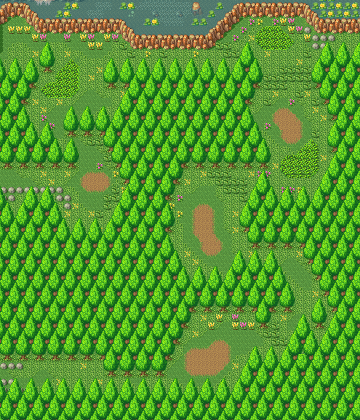 As soon as you arrive in the next section, you will be surprised to see a monster known as a Rabite. Of all the monsters in the game, Rabites are rather weak, but you still need to learn how to fight them. It's possible to defeat Rabites with only one or two hits, but you must wait until Randi's meter at the bottom of the screen reaches 100%, indicating that he's ready to attack at full strength. If you do not wait for this to happen, your strikes will be weak, and it will take several hits to defeat a Rabite. Listen for the audio sounds that accompany the moment when you reach 100% readiness so that you don't always have to watch the meter.

You'll have to follow the path as it winds around the woods. Along the way, there will be plenty of encounters with Rabites, as well as patch of grass that you must clear away. After fighting enough Rabites, your skill with the sword should improve, and you will reach a new skill level with the sword. Once this happens, you can increase the amount of damage you can do with your sword by holding down

for a few seconds and charging up a meter. Keep the button held until you are in position to strike an enemy, and then release the button to perform a special attack. 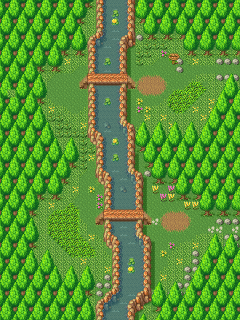 In addition to increasing your sword skill level, two other events are likely to occur. First, Randi is likely to level up. Leveling up will restore and increase your hit points, among many other stats. The second event that will occur is that one or more of the defeated Rabites will leave chests behind. To open one, walk up to it and press

. Randi will shake the box and the contents will be announced at the top of the screen. Later in the game, you will have to be concerned about whether the chests are booby trapped or not, but for now it's safe to assume that they are not. These chests are likely to give you life restoring Candy, which heals up to 100 points of damage. You can hold up to 4 of every item type, and if you already have 4, the extra one will simply disappear, saying it "won't fit" your bag.

Death
During the early stages of the game, you will be automatically revived if you get killed.

Continue following the path as it leads you to yet another section below the falls. This final section before you reach the village is smaller, but no less deadly. You must continue to clear away several Rabites as you cross over one bridge and then another. While you can choose to ignore or run away from these fights, it's better to stay and fight in order to increase your experience points, and cut down on the amount of time until your next level increase. Exit to the east and and you will have reached Potos, Randi's hometown. 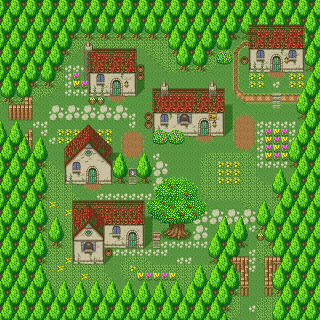 Potos is a small and simple town that has enjoyed a long period of peace and quiet. However, after returning to Potos the villagers are concerned about the monsters that have begun to appear around the village. Before returning to the Elder's house in the north-east, you may want to purchase supplies from the store, particularly the bandanna for 50GP which will boost your defense. Don't forget to select "Equip" from the Command Ring and equip the bandanna, or it will do you no good. Don't waste your money on Overalls, as Randi is already wearing a pair. Feel free to save in the inn (speak with the innkeeper, then say no to spending the night).

If you pop inside the bar, you may notice a mysterious man who does not speak to you. When you are ready, head to the Elder's house in the top right corner. The two boys, Timothy and Elliott will be informing the Elder of what happened when you show up. The Elder will notice, to his horror, that you have pulled the Mana Sword from the stone. Elliott will conclude that that's the reason why monsters have suddenly appeared, and begin to attack you. In doing so, he will push both of you over a sinkhole that appears. You both fall in. 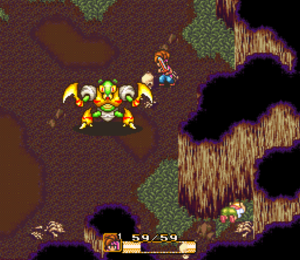 Mantis Ant. Notice the boy hiding in the corner.

When you land in the hole, you will encounter your first boss fight: the Mantis Ant. Elliott will be cowering in the corner, leaving you to do all of the fighting. Take this opportunity to get more accustomed to using your sword since you will be revived by the armored knight every time you die.

Mantis Ant is very simple, but his attacks will keep you from continuously attacking (and possibly kill you too). If you are already at Level 4 when you fight him you should have no problem in blocking his stunning attack; at Level 2, things will be a little bit challenging. You can further enhance your defense if you equip the bandanna to help block his Acid Breath. His only attack that will hit you 100% of the time is Gem Missile Level 0. While you're not getting hit, just wait until he's strafing around and slash him with your sword when its power is at 100% for maximum damage. If your sword is at Level 2, try using your charged up Level 1 attack to finish this fight quickly (it deals about 140% damage). Do not try to hit him when he is holding his claws in front of his body, you will not be able to damage him then.

Upon defeating the Mantis Ant, you will obtain the first Sword Orb.

After the battle with the Mantis Ant, Jema the Knight will pull you out of the hole. He will explain that as the person who removed the sword from the stone, only you can restore the sword to its former power. He suggests that you visit Sage Luka at the Water Palace. Then Timothy will tell you that the Elder wants to see you.

Inside the Elder's home, the village inhabitants have decided that, for the safety of the village, you must leave. Despite having raised you as his own child, the Elder is unable to go against the villagers wishes. He tells you to take what's in the chest in the basement (50 gold), and then you must leave. He will explain that your mother dropped you off one day and then disappeared. He hopes you can find your mother some day.

Grab any supplies you think you may need from the store before leaving for good. Purchase the bandanna if you haven't already, and possibly some Candy just in case. Then talk to the man guarding the lower right exit. He will unceremoniously kick you out of town, leaving you to your own devices. Head south along the path.