When you regain control of the game, you will be flying on Flammie. The scene in the sky has changed dramatically, along with the music. Off in the distance, you will likely see the Mana Fortress floating in the sky. As tempting as it may be to explore it, you won't be able to get inside of it just yet. For now, return back down to the Tree Palace. You will find Jema, who tells you that the mana power has grown so weak, that the cloud cover which usually protects that Mana tree has probably decreased enough for you to land there. Krissie is also around, and she will restore your health, but not your magic. Take the time to walk all the way around the Tree Palace until you reach the right side of the front. There you will find Neko with the most expensive equipment you can possibly buy.

Hopefully you accrued a lot of gold along your journey through the Sunken Continent and the Grand Palace. Now's your chance to spend it. Assuming you can afford it, buy three Gauntlets, three Vestguards, and three Needle Helms. The leap in defense will be tremendous, but all said and done, it will cost around 400,000 gold. If you don't have enough, buy as much as you can and remember to return to Neko when you can afford the rest. Equip them all, and then summon Flammie. First head for some place where you can visit Watts to upgrade any weapons, and stay at an Inn to rest and save your game. You should also make sure you are maxed out with four Faerie Walnuts and Cups of Wishes. Then summon Flammie again. It's time to find the home of the Mana Tree. 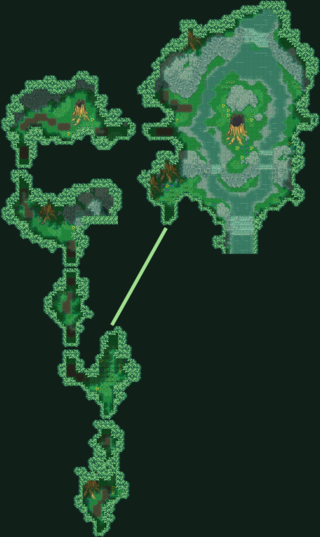 The easiest way to find the right location is to locate the Sea of Wonders at the north end of Kakkara desert. Then fly north, and slightly to the west. You'll come across what looks like a large island with a collection of clouds in the middle. At this time, you can direct Flammie to land there and drop you off. When you arrive, you'll land in a small patch of forest. A Needlion and what looks like a disembodied claw, known as a Griffin Hand, will be patrolling the area. These enemies can do a lot of damage, although if you equipped the gear from Neko outside the Tree Palace, you'll be in good shape. You'll also encounter Ice Thugs and Mushglooms, equally powerful opponents. Some of these enemies can drop treasure chests with powerful items in them, like Griffin Helms and Royal Jelly, but many of the chests they leave behind are just trapped, so be careful.

The view of your battlefield will sometimes be partly obscured by the treetops, making it difficult to tell where enemies are all the time. Computer controller characters will have no trouble finding targets, so base your attacks on them if you can't see the enemy yourself. You'll have to navigate this maze of a forest in order to find your objective. You'll also need someone equipped with the sword or axe in order to chop down the bushes that get in your way.

From the initial room, you will arrive in a room with two choices. The right path is a more direct route to your destination, although it will put you in the bottom of a large area that you must walk around. Alternatively, you can take the left route, which sends you through several smaller sections before depositing you just below the exit in the upper right corner of the large area. This exit is easy to miss. Beyond it is the first boss that you'll face. 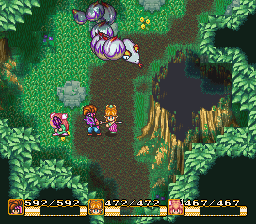 The Dragon Worm resembles the other snake-like boss you fought earlier in the game. It has a few different forms of attacks. It tries to slither over you, and on top of doing damage, it can cause a variety of status ailments, such as pygmy and moogle. It also has a separate petrify attack. Be sure to clear those up as quickly as possible. It can also cast a high level Earth Slide attack. The Dragon Worm is weak to Sylphid's magic, so cast Air Blast on it as much as possible. 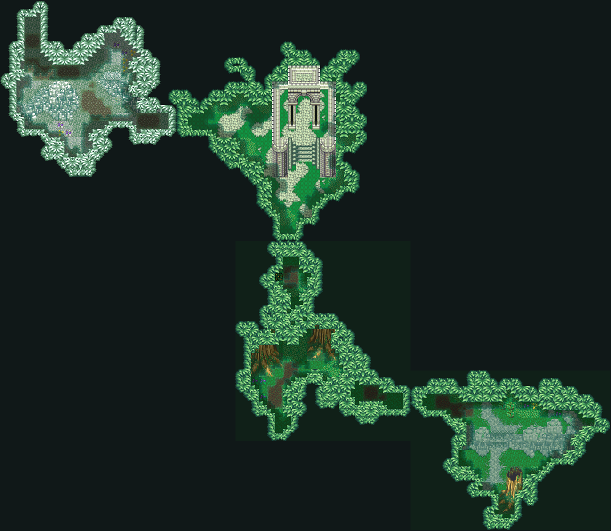 When you defeat the Dragon Worm, you will obtain an Axe's Orb. Head up to the next section. It has two exits. The one to the far right leads to a dead-end section containing three ghosts. Ghosts are difficult to kill, and there's not much reward for removing them. Instead, take the upper exit, which leads to a gate. If you step on the gate, it will tell you that you must defeat a dragon to the left in order to advance past the gate. Step down and head to the left. You'll arrive in a section where the color pallete is a little different. 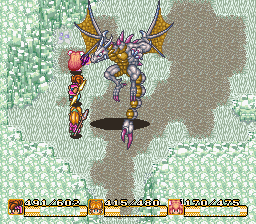 The Snow Dragon is the first of several elemental dragons that you'll have to face. As you can imagine, the Snow Dragon is capable of casting very high level Freeze attacks, and naturally it's weak to Salamando magic. This means you have two magic users who can cast fire spells against it. You can attempt to hit it with physical attacks, but it can be difficult to gauge where you need to stand in order to successfully connect with it. Casting magic is a much more recommended method of attack.

When you defeat the Snow Dragon, you will obtain a Bow's Orb. Then make your way back to the gate. It will now allow you to pass. You'll arrive in a section with three Griffin Hands. Fight your way past them to arrive in a wider area. Starting now, you will also encounter Eggplant Men, who like to cast Lucid Barrier and summon more Needlions to fight for them. From here, there's a left exit and a right exit. The left exit just leads to a dead-end section. The right exit takes you inside a cave. Once inside, you must climb down a flight of steps. Head up through the next room in the cavern, and you will reach another boss fight. 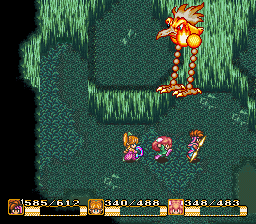 This boss is another large bird. It has an affinity to fire and has a lot of flame-based attacks. As such, it is weak against Undine's Freeze magic, so use that as much as possible. The Axe Beak will hop around the ground, sometimes putting itself out of reach of physical attacks until it returns. Keep hitting it with Freeze magic, and it won't stick around long enough to put your party at risk. 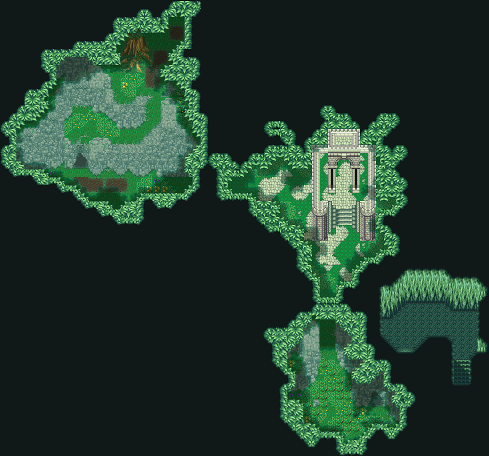 Once defeated, you will earn a Javelin's Orb, and a set of steps will appear, allowing you to access the staircase in the back. This will lead to a small chamber with an Eggplant Man and two Needlions, and an exit to the outside. Head out, and you'll encounter some Griffin Hands and a Ghost. Escape to the north, and you'll find another gate which claims you must defeat a dragon to the left. Head left, and you'll reach a small area with a cave entrance in the middle. Step inside the cave to face a dragon. 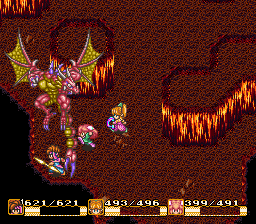 Inside the cave, you'll encounter the Red Dragon. Like the Axe Beak you just faced, the Red Dragon is a fire-based creature, with many flame attacks, and a fear of Undine's Freeze. Like the Snow Dragon, it's also difficult to get a bead on where you have to stand in order to hit it successfully. Once again, using magic is highly recommended. Cast Freeze as rapidly as possible to keep the dragon stunned during the fight. Keep your eye on your health, as this dragon has a lot of attacks which can harm all of your characters at once. 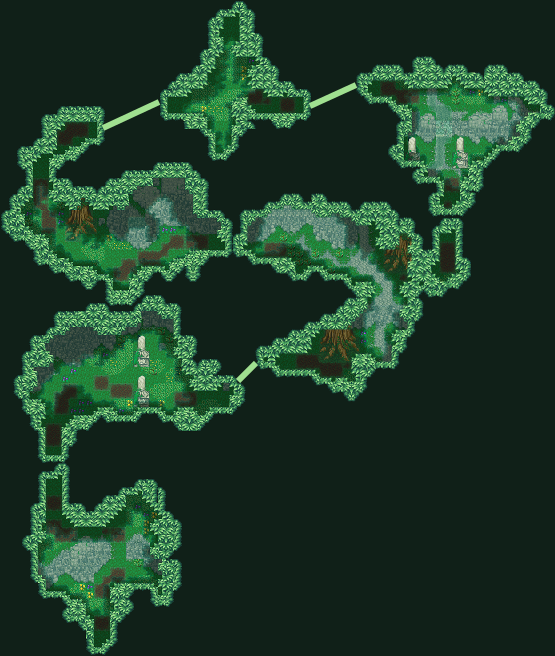 Defeating the dragon will earn you a Glove's Orb. Then head out of the cave and back to the gate. Now that you're granted access, head through the gate to a section with some Ice Thugs and a Ghost. There's an exit in the upper left corner that takes you to another section with broken pillars in it. Fight your way past the enemies to the right. It's easy to miss, but there is a hidden exit that leads to the right from this area. You can take it and save a little time, but assuming you don't see it, use your sword or axe to cut through the bushes as you make your way up and back to the left. Continue left through the next section, as the path bends up and to the right. You will arrive in a section that looks like it has four exits, but there actually isn't one to the south. Heading to the right takes you around to a section that connects with the hidden exit from before. To proceed, you must go north from the four-way section. 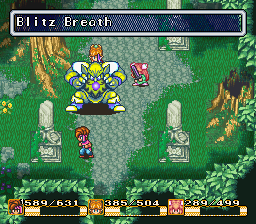 The Thunder Gigas is a lot like the other Gigas bosses you have fought before. It has the ability to suddenly dematerialize and float harmlessly around the screen before it comes back together again to attack. It can cast powerful forms of Sylphid magic, but that's not the real threat. Its most powerful attack is the Blitz Breath attack which can instantly do hundreds of points of damage to one character, enough to even kill them even at full health if you're unlucky. You may go through a Cup of Wishes or two during this fight if you're not particularly high level enough. The antidote to the Thunder Gigas is Gnome magic. Cast Gem Missile or Earth Slide as much as possible to shut the Thunder Gigas down before it gets to use Blitz Breath too much. 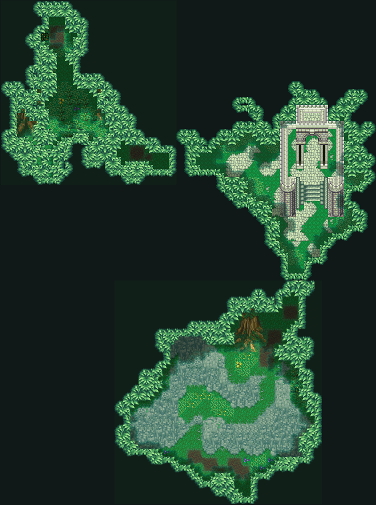 For destroying the Thunder Gigas, you're rewarded with the final Sword's Orb. Head up and climb up the winding path to the area beyond. You'll find a third gate here and once again, you must defeat a dragon to the left to get past it. Head to the left, and run through the next section to reach the exit at the top where the dragon is waiting. 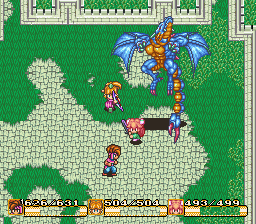 The Blue Dragon is a dragon with attacks that are extremely similar to the Thunder Gigas, including the devastating Blitz Breath. In fact, with a similar weakness to Gnome, you are best off using the same strategy of casting Gem Missile or Earth Slide as frequently as possible in order to maximize the damage you do, as well as prevent the dragon from attacking you. Since the dragon doesn't dematerialize like the Thunder Gigas did, you only have to worry about keeping it on the screen in order to target it with your magic. Upon defeating this dragon, you'll obtain a Boomerang's Orb.

Once you return to the third and final gate, you are now able to pass through it. However, take note that once you pass through this gate, you cannot return to the previous parts of the Pure Lands. Since the Griffin Hands only inhabit this region, and they drop the most powerful headgear for the boy, the Griffin Helm, you may want to be able to return to this region. If you want to receive this item, now is your last chance to call Flammie, recover your HP and MP, save the game and go back to the previous parts of the Pure Lands. If you're ready to continue, step through the gate.

When you pass through it, a long cut scene will begin, where you will learn about the fate of many things, including the Mana Sword, the Mana Tree, the Mana Fortress, and the Mana Beast. When it has all concluded, and you have control over your characters again, summon Flammie to pick you up.