Once you arrive at the teleport from the Mysterious Forest, head right and run up immediately to return to the Water Palace. When you reach Luka, she will restore any lost health. Then she will mentiont that the seal on the Water Temple is weakening. She instructs you to visit the cave to the east of the palace. 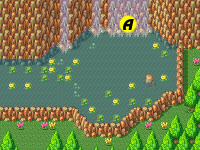 When you exit the palace, climb down the stairs, but remain in the water and head to the right. There you will find a small pond with a cave in the back. This area is protected by three Iffish. You are not required to fight them, but it's still a good idea to collect more experience points.

When you're ready, duck inside the cave. Inside, you'll find another body of water. Once again, it is protected by three Iffish, and once again, defeating them is optional. Make sure you have relatively high health before proceeding to the next room. If necessary, you should return to Luka and have her heal you back up before challenging the creature in the room above.

When you arrive in the next room, you'll see an egg with a heart on it. The egg will hatch, and a Tonpole will appear. The Tonpole itself is not too difficult of an enemy to fight. It hops around and attempts to damage your players by crashing into them. However, when it takes enough damage, it will not be destroyed. Rather, it will evolve into a Biting Lizard.

The Biting Lizard is a much bigger threat. It has the ability to use Cure Water on itself to heal its wounds, and it will stick out its tongue in an effort to grab one of you, chew you up, and spit you out for great damage. For this reason, it is necessary to battle to Biting Lizard much more carefully. It is possible to get the Lizard into a place where it can do less damage if you carefully maneuver it closer to one of the walls, or into the passage that leads back to the previous room. Never the less, it's a good idea to keep a lot of healing supplies on hand.

When you defeat the Biting Lizard, you will obtain the Glove orb, and the door to the room above will open. Head through the door and the Water Spirit Undine will appear before you. She will gift the Girl and the Sprite with two forms of magic. The Girl can cast defensive magic that heals damage and restores state. The Sprite can cast offensive magic that damages enemies or changes their status. When asked about the Boy, Undine states that the Mana Sword, once repaired, will be more powerful than any magic. In the mean time, elemental status can be cast on any of the mana weapons. Before you leave, Undine will also present you with the final mana weapon: the Pole Dart.

With your new found powers, it's time to return to Luka in the Water Palace. On the way out, practice casting magic on Iffish. Now that you have magic, you'll need to begin leveling it up, just like you have to level up your weapons, in order to make them more powerful. The more you cast magic, the more that element will earn experience until it advances to the next level. Take as many opportunities as you can find to cast magic. Upon returning to Luka, she will suggest that it is now time to visit the Underground Palace. You must now return to the Dwarf Village beneath Gaia's Navel.

Once you reach Gaia's Navel, be sure to upgrade the Gloves using the orb you collect. Also make sure that you are wearing the best equipment that you can currently buy. That should include the Kung Fu Dress for the girl, and Spikey Suits for both the boy and the sprite. 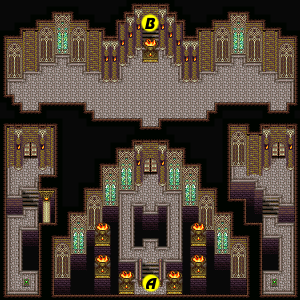 Return to where you fought Tropicallo, and head through the door in the back. You'll see a river a lava cutting off your path to the cave above. There's a crystal on a ledge that you can target with magic. Cast Freeze on the crystal to cause the lava to cool and harden, allowing you to advance through the cave above.

Before continuing, do your best to conserve your magic points in here. There are no save statues, and you'll need as much magic as possible when you reach the boss. Also remember that you are not really required to fight any of the enemies that you encounter here. But as usual, you are encouraged to fight them in order to gain experience and grow in levels and power, as the game becomes progressively more difficult if you don't.

When you arrive in the first floor, you will encounter two pink Goblins guarding the entrance. Goblins can throw boomerangs, and they will summon blue Ma Goblins, but remember that no more than three enemies can occupy the screen at a time. Focus on the pink goblins as much as possible to cut down on the number of blue Goblins that are generated. Passing through the door, you'll find another Ma Goblin waiting for you in front of a torch. This particular torch is blocking access to a stairwell. To both the left and right of here are two switches which you must step on to activate and remove the torch. You can do them in any order. There are enemies known as Chess Knights (which resemble, naturally, the knight pieces on a chess board) down either side of the hallway. A Blat guards the left switch while a constantly dividing Green Drop guards the right. Once you step on both switches, the torch will disappear, and you can proceed to the next floor. 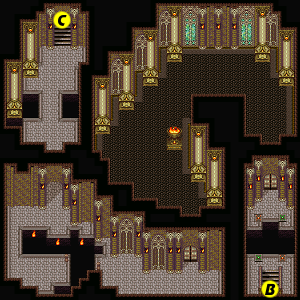 When you first arrive in the next room, you'll have to step on a green switch to make the bridge appear. The cross the bridge and pass through the door way. Follow the room as it curves around, and you'll encounter a Goblin along the way. Try to remove it before it can summon any Ma Goblins to fight with it. Another Goblin will be waiting for you outside the door of this chamber. When you clear it away, you'll find a gap that can only be crossed by using the whip to connect to the post on the opposite side. Swing over, where you'll be greeted by a third Goblin.

At this point, Gnome will appear and prevent you from passing. Gnome and the sprite will get into a scuffle. Then an earthquake will occur, causing Gnome to suddenly flee. At this point, you will be attacked by the palace boss, Fire Gigas. 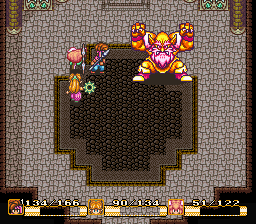 Fire Gigas has a tendency to attack non-stop upon a character. At its level of power, Lava Wave and Exploder will do at least 50 HP of damage. After taking damage, it will split into fire orbs and is invulnerable until it reforms. The best way to defeat the Gigas is to use Sprite tp chain cast the Freeze spell. To chain cast, you must try to begin casting Freeze just as the previous Freeze's casting has ended. Additionally, have the girl cast Freeze Saber on the boy and herself, and be sure to watch for damage so she can heal anyone who needs saving.

Even though Fire Gigas's spell attacks can damage all three characters, it is possible to block them simply by casting a spell. When you notice Fire Gigas beginning to cast a spell, retaliate with a set of your own from your two spell casters. 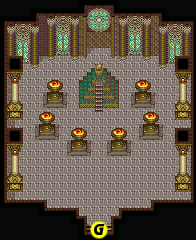 Upon defeating the Fire Gigas, you will earn an Axe orb. Proceed north into the mana seed room, where you'll encounter Gnome again. Sprite will threaten him, and he'll beg to be spared. He'll gift you with his magic. Sprite will gain two attack spells and Slow Down magic, while the girl gets a Speed Up spell, an armor increase spell, and the ability to enchant weapons with earth magic. Touch the mana seed to restore its seal, and the sprite will regain its memory. It will remember that it came from the Upper Land Forest.

Now you must entirely exit from the Underground Palace and return to the Dwarf Village. Be sure to visit the smith and upgrade the ax before you climb up the stairs in his shop and return to Gaia's Navel. However, the path to the Upper Land Forest is unclear. If you return to Luka in the Water Palace, she will express concern that Jema has not returned from Pandora. Perhaps it's time to investigate there further.