Vehicles can be called in by players to provide additional firepower. While they are significantly more expensive than Deployables they are able to move about freely and can withstand a lot more damage. All vehicle weapons have unlimited ammunition, but each weapon has a cooldown time before it can be used again.

Except for the Heavy Armor each vehicle can accommodate several players, each manning a different weapon. Players can change between vehicle seats with 1-4. The player in the first seat is also the driver. 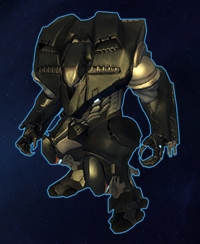 The Heavy Armor is a small mech that can accommodate a single man. Its heavy firepower can overpower individual infantrymen, although it is no match against a Heavy Tank or several determined attackers. Its dual machine guns can tear apart enemy infantry and wear down enemy vehicles and deployables, but like the infantry machine gun it is most powerful at close range.

The Heavy Armor also has a powerful melee attack (F) which can be used to quickly smash deployables and vehicles as well as punch enemy infantry. If the enemy is damaged enough to be killed by one more punch he will be grabbed and smashed by the mech when the next swing hits him, killing him instantly.

The Heavy Armor can also jump (Space) to clear small hurdles or close in on an enemy. The jump does some damage to enemy targets in the immediate vicinity. Like other special abilities the jump has a cooldown period before it can be used again.

The four-man Heavy Tank is a major component of combat. While slow-moving its and deals enormous amounts of damage. In addition to its enormous main cannon(s), when fully manned the Heavy Tank can fire machine guns, missiles and mortars. Section 8's Heavy Tank has two cannons while ARM's has one, but they both do the same amount of damage.

The Convoy is a special vehicle spawned for the Convoy Dynamic Combat Mission. It has much more armor than even the Heavy Tank but is slower and not as well armed.