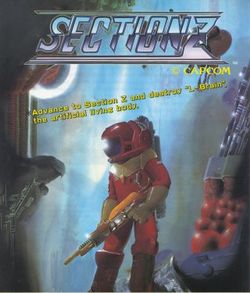 Section Z is a side-scrolling shooter produced by Capcom that was originally released in 1985 as an arcade game. As a sole astronaut, you must penetrate the alien Balangool space craft and destroy the evil "L-Brain". Make your way through 26 alphabet-labeled levels to find his lair. Every few sections (stages), the direction of the game's scrolling changes, from left-to-right, to bottom-to-top, to right-to-left, etc. One section features a pinball machine in which you must avoid the multiple flying pinballs.

The only contemporary home conversion of this game was developed for the Family Computer Disk System in Japan and the Nintendo Entertainment System in North America, and was released in 1987. It is considerably different from the arcade release, and therefore has its own guide.