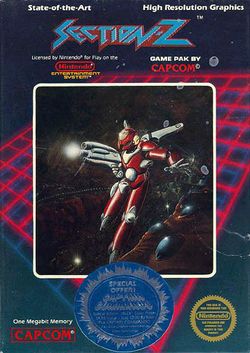 Section Z is the home conversion of an arcade game of the same name, developed by Capcom. It was initially developed and published for the Famicom Disk System in Japan in 1987, and it was converted to cartridge format and published in the US for the NES that same year. It was published in Europe two years later.

The home conversion of Section Z is based around the same idea of gameplay; a jet-packed soldier with the ability to fire to the right as well as to the left, who must survive several automatically scrolling stages. However, beyond that, it differs from the arcade significantly. This game only scrolls from left to right, as opposed to the arcade which scrolls in four different directions. Rather than going through lettered sections, from Section A to Section Z, the player must now travel through 60 numbered sections (in fact, there is no Section Z at all in this conversion.) The stages are also non-linear, providing the player with two choices at the end of each section, allowing the player to choose which course he or she takes through the game.

It is now the 21st Century. High frequency radio and television communications between Planet Earth and the space-exploring Saturn Space Station blast warnings of approaching invaders, then abruptly cease.

You shed your earthly identity to become the one remaining astronaut in space. You unite with freedom-fighter Captain Commando to enter the outer regions of space. Concealed in a special solar-energized, jet-propelled supersonic spacesuit, and armed with multi-directional weaponry, you depart Earth's surface on a death-defying mission.

You and Captain Commando must maneuver safely through four levels of adventurous battle scenes, penetrating the defenses established by the Space Soldiers of Balangool. You are challenged as you fight through Sections A to Section Z - where "L-Brain", Balangool's Master Control, programs domination of the universe.

L-Brain, Master Control of Balangool, secured in Section Z of Fortress Balangool, headquarters of this brutal enemy force, transmits communiqués throughout the universe. Balangool Space Soldiers receive instructions from L-Brain while engaged in interplanetary invasions. Their goal is to conquer the universe.

Balangool Captains are stationed at each stage, guarding giant super powered transmitters. Strong, red barriers surround two transmitters found at Stage One. To clear these red barriers you must destroy the Enemy Generator supplying power to the barriers. Should you successfully eliminate the generator, proceed to eradicate the Balangool Captain. For only then can you proceed to another Stage.

As you progress, increase your supply of weapons and energy. Without them, you cannot reach Section Z to bring L-Brain Master Control to extinction, heroically saving Planet Earth.