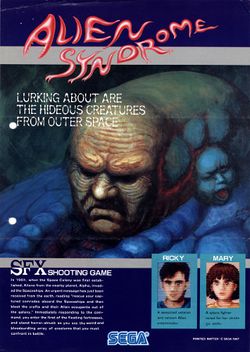 Alien Syndrome is a run and gun arcade game developed by Sega in 1987. It draws much inspiration from the popular 1979 classic movie Alien and it's 1986 sequel, Aliens. Two players control two soldiers, named Ricky and Mary, who fight their way through large eight-way scrolling levels while rescuing their comrades who are being held by aliens. After they have rescued a certain number of hostages, the exit opens and they can pass through it in order to fight the end-of-level guardian. If this monstrosity is defeated, they are then able to move onto the next stage. Alien Syndrome features two player simultaneous gameplay and pickups which assist the player, including better weapons and maps of the current level.

In 1988, the game was ported to the Sega Master System, MSX, Amiga, Atari ST, Amstrad CPC, and Commodore 64. A Famicom port was officially published by Sunsoft in Japan, which was adapted for play on the NES and unofficially published in North America by Tengen. The game was later ported to the ZX Spectrum (1989), Sega Game Gear (1992) and Sharp X68000 (1992), the latter being the only arcade perfect port.

The game was also converted to polygonal graphics for the PS2 as part of the Sega Ages re-release program, and included in US version of the Sega Classics Collection (it was removed from the European version to receive a lower age certificate). This version has updated controls, adding the use of both analog sticks, similar to the gameplay seen in Robotron: 2084 and Smash TV. The original arcade game was also included as an unlockable in Sonic's Ultimate Genesis Collection. A sequel of the same name, Alien Syndrome, was released for Wii and PSP on July 24, 2007.