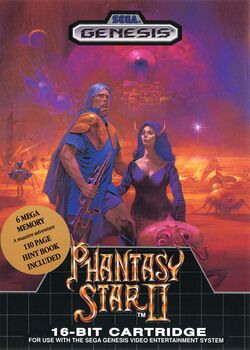 Phantasy Star II is the second installment in Sega's acclaimed Phantasy Star series and serves as a sequel to the original Phantasy Star for the Master System. Phantasy Star II takes place 1,000 years after the events of its predecessor and follows the journey of a government agent named Rolf and his friends, who are on a mission to discover why the protector of the planet Mota, Mother Brain, has started malfunctioning.

Gameplay is similar to the original Phantasy Star. Its battle system is turn-based as well as menu-based, allowing the player to choose commands for their party of up to four characters. Each of the eight characters has a different set of preferred weapons and armor, as well as techniques, suited to the character's job. The player must defeat enemies in the overworld and in dungeons to advance in the game.

The Algo star system, comprised of the planets Palma, Mota, and Dezo, was ruled by the cruel dictator Lassic. He was toppled by the heroic efforts of a young woman named Alis Landale and her companions. One thousand years later, the Algo system is experiencing a golden age due to a supercomputer named Mother Brain housed on Mota. Mother Brain completely terraformed Mota, transforming it from a desert planet into a temperate paradise like its sister planet, Palma. Mother Brain directs human agents to enforce the peace, and controls systems such as the Biosystems Lab, which genetically engineers plant and animal species for human use, and Climatrol, which regulates Mota's normally harsh climate to something more temperate.

However, recently there have been problems. The Biosystems Lab has begun to create hostile genetic aberrants instead of useful species, and rivers and lakes have been drying up. Desperately seeking answers, the Commander of Mota, a duly-appointed agent of the Mother Brain, assigns his most trusted agent, Rolf, to investigate.

The game was made available through Nintendo's Virtual Console service in 2008. On June 10, 2009, it was released on Xbox Live Arcade under the Sega Vintage Collection banner. On August 26, 2010, an iPhone port of the game was released. The port later became available on the iPad and iPod touch as well. On June 22, 2017, Sega made the game available for free through both iTunes and Android.