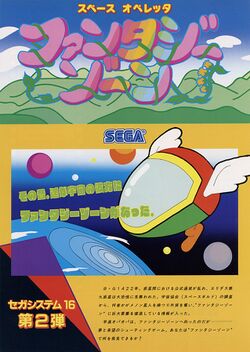 Fantasy Zone was ported to the Sega Master System, MSX, NES, X68000, and TurboGrafx-16 systems. There are actually two different versions for the NES. The Famicom version is ported by Sunsoft, while the NES one is an unlicensed version by Tengen. While all of these ports play similarly to the original version, some of them have several omissions and changes. For instance, the Master System version lacks some features such as the radar that indicates the location of the bases or a gauge that indicates how much energy left they have, and two of the bosses were replaced by original ones. Other versions have several changes as well. A remake of the game was later release for the Sega Saturn under the Sega Ages label. A couple of enhanced remakes have been made for the PlayStation 2 under the Sega Ages 2500 label. In early 2008, the Master System version saw a re-release for the Virtual Console. It was released in all territories at a price of 500 Wii Points. In 2015 Fantasy Zone was released on the Nintendo 3DS via a 3D Classic.