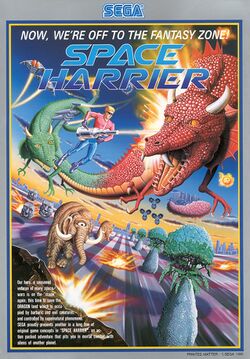 Space Harrier (スペースハリアー, Supeesu Hariaa?) is a third-person rail shooter arcade game, developed by Yu Suzuki and released by Sega in 1985. Produced for arcades, the title has been ported to over twenty different home computer and gaming platforms in Japan, North America and Europe. It produced home-system sequels in Space Harrier 3-D and Space Harrier II, both released in 1988, and spawned the 2000 arcade spinoff Planet Harriers. A polygon-based remake of the original game was released by Sega for the PlayStation 2 as part of their Sega Ages series in 2003.

Space Harrier was one of the first arcade games to use 16-bit graphics and Sega's "Super Scaler" technology that allowed pseudo-3D sprite-scaling at high frame rates. It had the ability to scale as many as 32,000 sprites and fill a moving landscape with them, along with 6144 colors on screen out of a 98,304 color palette. It also introduced a true analog flight stick for movement, with the ability to register movement in any direction as well as measure the degree of push. This could move the player character at different speeds depending on how far the stick is pushed in a certain direction. The game was also an early example of a third-person shooter.

Space Harrier is set in the "Fantasy Zone", a surreal world composed of bright colors and a checkerboard-styled ground. The enemies are also unique, featuring prehistoric animals, Chinese dragons, and alien pods. The player is forced along the levels, running or flying around enemy fire, while shooting back with fireballs via the character's under-arm cannon (which doubles as a rocket-esque device allowing the character to fly). It has a total of eighteen stages, each lasting less than two minutes in length and containing a boss at the end. Two levels therein—the fifth and the twelfth—are bonus stages, while the eighteenth level is a boss rush containing six of the game's bosses encountered up to that point. The 1986 Sega Master System port of the game included an exclusive final boss, a powerful twin-bodied fire dragon named Haya Oh (named after then-Sega president Hayao Nakayama), and contained an original storyline and ending that were not in the arcade version.