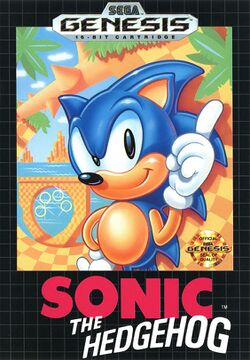 Sonic the Hedgehog is the platform game that launched the career of Sonic the Hedgehog and Sonic Team. It was the first in Sega's Sonic the Hedgehog series. Sonic was intended to Sega's mascot to compete with Nintendo's Mario. The game and character were specifically designed to demonstrate the processing speed of the Sega Genesis.

This was the first game to propel the Genesis into mass popularity in North America. After it was released, it eventually replaced Altered Beast as the bundled game with the console. The game featured many novel elements which contributed to its popularity and helped to promote the uptake of 16-bit consoles.

Sonic the Hedgehog added the element of speed to the standard platform formula and introduced other unique elements as well, such as the loops, springboards, hi-speed devices, and rings now permanently associated with the game series.

Since its release it has been ported to many other systems and compilations, including Sonic Jam, Sega Smash Pack: Volume 1, Sonic Mega Collection (and Sonic Mega Collection Plus) and, most recently, the Sega Genesis Collection. It is also available via the GameTap and Wii Virtual Console download services. A special Game Boy Advance version called Sonic the Hedgehog Genesis was released to celebrate the series' 15-year anniversary. This version included an "Anniversary Mode" where the only change was the addition of the spindash move introduced in later games.

The plot of the first Sonic the Hedgehog game takes place on South Island, a mysterious island teeming with amazing natural scenery and wildlife which is forever drifting across the sea. This drifting is the result of the power of the Chaos Emeralds - a group of six mystical gemstones said to be residing on the island - each of which can provide an unlimited supply of pure energy.

An evil scientist by the name of Dr. Ivo Robotnik (Dr. Eggman in Japan) learns of the power of the Chaos Emeralds and decides to harness their power to conquer the world. Launching an invasion of South Island, he establishes a mechanical base on the island and begins kidnapping the animals to serve as living batteries for his army of "badnik" robot soldiers, helping him search for the Chaos Emeralds.

However, not all hope is lost! A blue speedy hedgehog by the name of Sonic learns of South Island's plight! Holding a hatred of injustice, he sets out to save the animals of South Island, grab the Chaos Emeralds before Robotnik can, and stop the evil doctor!