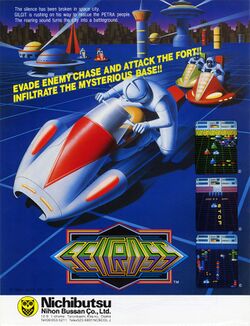 Seicross is a game released for both the arcade and NES. It was originally developed by Nichibutsu and released in the arcades as Sector Zone, but it was distributed as Seicross outside of Japan. When it was converted for play on the Famicom in 1986, it retained the name Seicross, and was published in America by FCI.

During the game play of Seicross, the player rides a gliding motorcycle-like vehicle, bumping other riders, collecting "power" modules and collecting blue people who are stranded. A second area removes the riders and adds rough terrain, while the final leg features a battle with one or more Dinosaur Tanks, which launch their heads when destroyed. The sequence repeats infinitely, getting progressively difficult and changing backgrounds.

Here on the planet Colura lived two different tribes. One was the Petras, a highly civilized tribe. Another was the Basrah, a vicious tribe. The larger Basrah all of a sudden declared war on the Petras. The Petras were very civilized, and were pacifists who did not possess enough arms and weapons to protect themselves against the Basrah's attack. They were quickly driven underground without much resistance. A handful of the Petras were left and a few ex-captives who barely escaped from the Basrah were waiting to be rescued. Finally the Petras developed a mini-size rescue bike which they called Gilgitt Petras. They blasted off on Gilgitt Petras from their secret hideout to rescue the Petras who still remained behind. Race your bike along thrilling backgrounds as you battle alien enemies. The serenity of the space city is broken as players blast off into space from the gate in order to save their people who are left in the battlefield.

To select any stage, press and hold