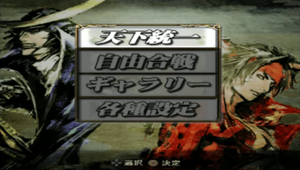 There are four options in the game's main menu:

In Devil Kings, select an option with

. In Sengoku Basara, select an option with 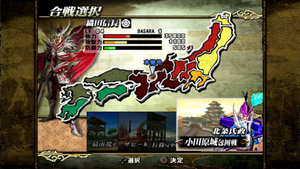 Sengoku Basara is a game made up of singular stages representing historical battles of the Japanese Sengoku period (or, in the case of Devil Kings, stages that are purely fictional). Fittingly, battles are presented on a map of Japan. You are given an option to attack any territory that surrounds you, while other battles take place on other locations of the map at the same time. Each color represents a warlord; when territory is conquered, its color will change to that of the victorious warlord. After selecting a stage, you are brought to another screen before battle.

The pre-battle screen allows you to select which two skills you bring into battle, along with accessories and weapon; the former is unlocked by leveling up your character, while the latter two are unlocked as random rewards for clearing stages. Skills are special attacks that deal more damage than normal (

) attacks. Their use in battle is unlimited, but of the five skills available to a character, only two may be chosen for each battle. 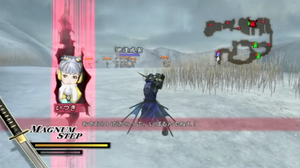 The most important elements of the HUD are present at the bottom-left and top-right of the screen. The top-right shows the area's map; blue dots represent ally squad leaders, red dots represent enemy squad leaders, green blocks represent gates (usually opened by defeating a squad leader or boss), and the red daimyo helmet represents a boss character (usually the area warlord but can be a subordinate general). Enemy squad leaders are usually followed by groups of enemies; defeat them and their squad will be weakened and attempt to retreat, though they can be killed with one hit for easy experience. The bottom-left of the screen shows the technique currently in use (which can be switched with

), health (represented by the yellow bar), and BASARA/Fury (represented by the bar below the health bar). The BASARA/Fury bar can be filled up by taking damage, defeating enemies, or collecting water bottles from red crates; once filled, the character's BASARA attack/Fury Mode can be activated, and they will gain temporary invincibility while performing a special attack. Recover health by collecting rice balls from red crates.

Occasionally, the characters on the map will talk to each other or their soldiers. The speaking character's portrait comes up on the screen, as present in the screenshot to the right where enemy warlord Itsuki is speaking. Enemy soldiers can range from weak archers to large and powerful hammer-wielding or log-swinging foes, but none pose the same threat as a boss character. A stage is cleared only when the enemy warlord is defeated; you can defeat other soldiers to open gates or obtain more experience, but the stage only ends when the primary boss character's health is fully-depleted. While lower-ranking generals such as Kasuga and Tadakatsu Honda do all they can to assist in your defeat, taking them down isn't necessary to conquer the land.