Assault on Ueda is a stage which can only be accessed in Yukimura's story and free play. Yukimura's greatest rival, Masamune Date, has attacked and taken what was once the stronghold of the Takeda Army. It is now up to Yukimura to prepare an assault on Date's army and take back the castle for the sake of his army and his lord.

This stage has you starting from the opposite end of Flooding Ueda Castle. 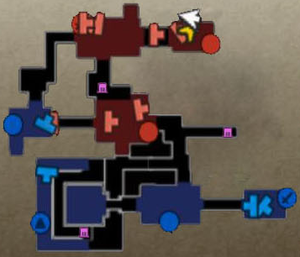 You'll start out at at the location where Yukimura would be if you were facing him. Take the first camps to open the gate and reveal the rest of the map. Kojuro Katakura, Date's right-hand man, will also make an appearance at the far western camp when that's done. Defeat him to draw Masamune out. Defeating all squad leaders along with Masamune and Kojuro will earn you a Special Reward. After Date's army floods the castle (as would be done by your army against Yukimura), you'll be able to travel in the waterways. Break all the crates here and above-ground for another Special Reward. Be aware that a bridge exists above the camp which Kojuro is stationed; it can be accessed by hopping on boxes, and having your general do a running jump if they can't fly.