The Battle of Kannagawa lies on the border of Kozuke and Musashi, with the area currently held in the control of Hirotsuna Utsunomiya. An otherwise straight-forward map, Hirotsuna's gimmicks attempt to transform it into a foggy maze. 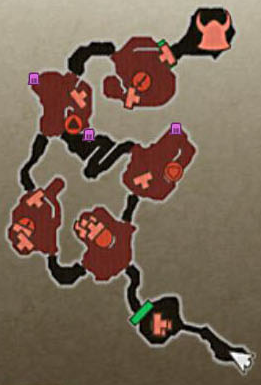 Kannagawa's map before the fog sets in.

The battle will start with an attack by a tiger and its handler. The Tiger Handler presents as much of a threat as a squad leader, and he'll stay out of the way unless you're nearby, so strike at the tiger first. It's a bit of a challenge to combat, especially if the chosen character is at a low level, since it is rarely stunned. An all-out attack won't work unless you're prepared to lose a substantial amount of health, so do the best you can with a hit-and-run strategy (unless you've chosen a ranged fighter; in this case, don't stop attacking). While not many attacks have an effect on the tiger, the disadvantages don't end there. None of the playable characters can withstand as much as a simple roar from the tiger without having their guard broken. Dodging is really the only defense any of the generals have against these beasts.

Defeating both the handler and the tiger will open up the gate, but the gimmicks aren't over with. A fog is dispensed into the air shortly after walking past the gate, giving the attacking general a hazy line of vision. The map is also affected by this; commanders will have to be defeated for each camp to become clear again. Prepare yourself for the occasional tiger, as a seemingly endless amount of roars can be heard in the distance until the camp is taken. Defeat ten for a Special Reward. Once all camps are taken, the area will be completely ridden of fog and the gate to the warlord will open, earning you an easy Special Reward.

For this battle, Hirotsuna is accompanied by a tiger. Try to get the two together for a BASARA or Hero Time attack, and finish off the stage's final tiger to direct all focus on Hirotsuna. Compared to the rest of the stage, this battle shouldn't be much of a challenge: his ice-based attacks are easily dodged, and so is his BASARA attack. Two attacks of his to look out for can be anticipated when he glows blue. One of these has him shooting ice through a slow rotation, and the other allows him to shoot a bulk of ice up from the ground. It is possible to stun him mid-charge and prevent the attack from occurring, but a simple block would suffice.

Defeating the tiger isn't mandatory, but it does make the battle a lot less difficult. Finish Hirotsuna and the battle will be won.