With the exclusion of the boss-heavy Sekigahara maps, the Cliffs of Mikatagahara may be the most difficult map of the game. Fittingly, the area is run by the virtuous leader of the Eastern Army, Ieyasu Tokugawa. The Tokugawa Army consists of only one other general, and Tadakatsu Honda will certainly not let Mikatagahara go without a long and perilous fight. 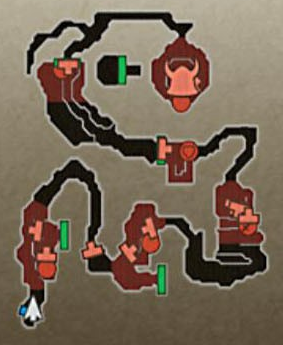 Reach the end of Mikatagahara's long and winding paths for a battle against Ieyasu.

You start off the battle with an enemy camp a short distance away from you. Make your way up the hill and attack the commander, but be weary of the gunners standing defensively on either side of him. Take the camp to open up a zipline that will make travel to the next camp much quicker. Unfortunately, by the time you reach the next camp, Tadakatsu Honda will be alerted to your position and will be dead-set on getting in your way. Here, you have two options: you can either stand your ground and fight until the Gundam-style mech is down, or you can take the remaining camps as you run away from the seemingly-invincible beast. The game recommends running away; this is certainly the best option if it's your first or even second time through the map and your general is at a low level. Your general should be at least at level 50 if you want to stand a fair chance against Tadakatsu, and a lower difficulty certainly helps; Tadakatsu is quite capable of downing your general in only a couple of hits on Basara difficulty. Dodge and make use of any available Basara attacks to force the general to power down and obtain a Special Reward.

Whether you've defeated Tadakatsu or have chosen to avoid him, zipline over to the third camp after taking the second. Here the camp is on a raised platform over a gate leading into the area. This may get difficult if Tadakatsu is still on the chase, but fortunately there is a nearby escape route in the form of a zipline on the other side of the platform. Take the fourth camp to halt Tadakatsu's advance. If you haven't defeated him by this point, Tadakatsu will take to the skies to begin a new form of assault against you. Make sure you don't remain in the same place for too long, as he shoots lightning that homes in on your position. Drop down in the trenches on either side of the path to find special crates; these also double as potential fugitive positions. Towards the end of this path is a branch that is easy to miss. Turn left and some soldiers will be holding up shields blocking you from this alternative path. Knock them away to find a third potential fugitive position and a catapult that leads you into a secret camp. Defeat the commander and catapult to the next secret area to find Tadakatsu. His health will be much lower here, so defeating him shouldn't be as time-consuming as it would have been if you took him out earlier. Take him down here for a Special Reward.

If you didn't take the aforementioned route to fighting Tadakatsu, you only have one option and that is to simply find Ieyasu Tokugawa at the end of the path. If you did just defeat Tadakatsu in the secret area, you can catapult yourself to Ieyasu's position up above, which will also give you access to the final camp.

Ieyasu is not as durable as Tadakatsu nor is his reach as long, so this shouldn't be much trouble after facing the intimidating mech. Still, he has a multitude of attacks that are worth dodging. This includes his normal art combo, which Ieyasu is capable of charging with every punch to make each hit much more powerful. Keep in mind that this also makes him slower, giving you time to dodge or break his combo. His only long-range attack that isn't easy to avoid is the Sun Splitter, in which he punches the ground to create a shockwave. Take him out to complete the battle.