Ueda Castle is where the forces of Shingen Takeda have settled. However, due to his critical condition, his apprentice and general Yukimura Sanada has taken over as leader of the Takeda Army. Your goal here will be to flood the castle by attacking the camp commanders who hold down the water-gates, and subsequently defeat the army's energetic commander for your general to claim the land as their own. 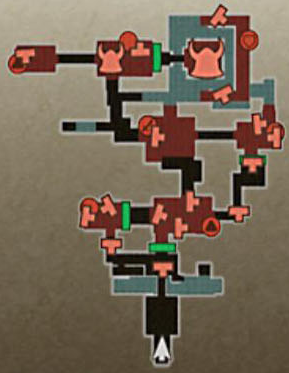 The lower ground is initially inaccessible due to high levels of water. 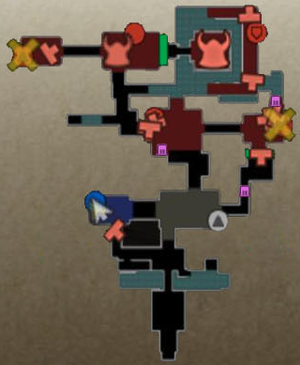 The marked camps aid in flooding the castle.

Get past the first gate and you'll come across a split path: one gate and two open exits. Take the camp here and the one to the left before moving on. The right path leads to a water-gate camp guarded by Shingen's Cavalry and the left to an artillery camp. Take both camps before heading off to fight Sasuke Sarutobi.

Sasuke is a skilled general who specializes in shadow ninjutsu; as such, he is able to create shadow clones of himself that mimic his own move set and skills. Effectively, this is a battle against three identical yet strong generals. The Sasuke with the boss icon next to his name is the one you need to focus on, though with the combined attacks of all three ninjas, it isn't an easy task. Fortunately, there is a way around a battle against three Sasuke's. Take the camp here and the one to the left before defeating any of them to commence a flood in the area, washing away the clones and leaving only the true general. This strategy also earns you a Special Reward.

Finish up the area by cleaning up the once-flooded waterways of all of the hidden Hatena Boxes in blue crates. From here, you can take two strategies toward attacking the area warlord. 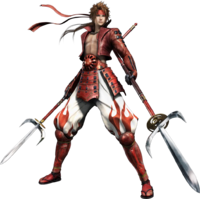 Young and hot-headed Yukimura Sanada is awaiting the attacker who has flooded his beloved Oyakata-sama's castle, and it shows: his fire-based attacks are ferociously quick and powerful, and his chase is relentless. You can approach him by either passing through the newly-opened gate following the defeat of Sasuke, or descend down to the waterways to perform a surprise attack. Once all necessary camps are taken, the network of waterways will become accessible and you'll be able to find a staircase that allows you to circle around the oblivious Yukimura to the final camp. Take the camp for a Special Reward, then surprise the flustered general with a rear approach. Focus on dodging during the battle, as chances are one of his chained attacks will break your guard. Use the Hero Time and BASARA obtained by this point from taking all camps to defeat Yukimura and claim victory over the stage.