Kubota is a domain governed by the Satake clan, led by area warlord Yoshishige Satake. With only four camps, three of which must be occupied, Headstrong at Kubota is one of the shortest battles of the game. The only danger here is the Occupational Chiefs that come along every now and then to reclaim camps. Usually you will be notified of this, with a scene showing the chiefs being deployed. Make use of shortcuts whenever this pops up to dispose of them quickly. 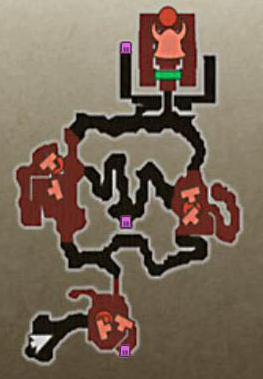 Kubota, one of the smaller maps of the game.

A short path from the start leads right into the first camp. Defeat the camp commander here and a scene will interrupt, signaling the entrance of the occupational chiefs. It's their job to reclaim the camp you just took, so do all you can to get them out of the way quickly and move on to the next camp (but not before taking a narrow hidden path to a blue crate containing a Hatena Box). A fork leads to two separate camps. Take either camp and more occupational chiefs will show up. Do the same and take the middle path to the other camp, picking up the Hatena Box and the horse for faster travel along the way. The left camp's commander is located at the top of a staircase, where archers will greet you at the top. The right camp contains a shortcut to the left by way of zipline, however, taking the middle path is recommended for collection purposes.

Once both camps are taken (and all occupational chiefs are dealt with for a Special Reward), the gate to area warlord Yoshishige Satake will open. Before going straight to him, drop into the trench below the bridge and collect a Hatena Box at the end of the left side. For the second special reward, you must first enter Yoshishige's camp. 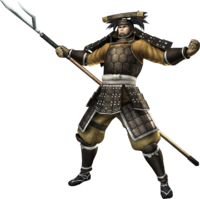 Yoshishige should be a quick boss even on the hardest difficulty. Though his attacks can be bothersome when strung into combos, they aren't very powerful and the large arena gives you plenty of places to hide. His BASARA Art is also short and easy to avoid by simply dodging before his spear comes in your reach. Start off by ignoring the clumsy commander and going straight for the camp in the back which he's protecting. Defeat the camp commander here after occupying all other camps for a Special Reward. You can now return your attention to Yoshishige. This shouldn't take long, but if you get reckless enough for your general's health to reach near death, break the crates scattered around the arena to gain health and a BASARA Art, and end the battle.