Kaerikumo Castle is one of the few battles in the game led by a warlord who remains unplayable in Utage. Yoritsuna Anegakoji is a generic warlord created to serve as a boss for Samurai Heroes, with no subsequent purpose in the series. Nevertheless, Kaerikumo is a good stage for beginners to understand the basics of battle. Yoritsuna utilizes a nature gimmick, emphasized by the location of his castle deep in the forest and his ability to summon trees in battle. 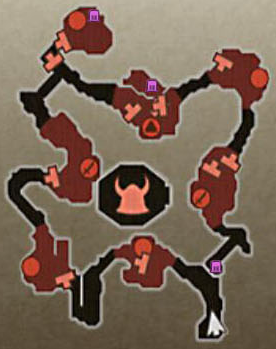 The map of Kaerikumo's castle.

The area warlord is initially blocked off from the rest of the map in the center. Simply enough, the gate must be opened by taking the four main camps (the others are optional). Once all camps are taken, you will receive a Special Reward. The second Special Reward is obtained by taking these camps within the first 2 minutes of the beginning of the battle. This can be achieved with a high level general, a powerful weapon, and frequent use of zip lines and catapults. One of these can be found at every camp, so use them as you go to cut the time it would take to travel between camps. Lastly, be wary of archers. They tend to hide themselves well within the scenery, and will usually pop out of their hiding places in the ground to protect the camp commanders.

Once all camps are taken, continue following the path back toward the starting point to find a hatena box. Then, head back through the gate which opens behind the final camp. There are plenty of archers that stand in your way on the tower up to Yoritsuna. There are also some blue crates behind a couple of the staircases. At the top you will find the arena where Yoritsuna awaits the battle.

This boss may be a bit unpredictable the first time, but once you have his moments memorized, his attacks become strikingly easy to avoid by blocking, dodging, and even parrying. Whenever he glows green, he's preparing one of his special attacks. If your general is strong enough, you can interrupt this process without even giving him the chance to attack. If he carries on, there are a few different attacks he may perform, usually some variation of throwing logs in your direction. He will occasionally raise himself up on a tree, putting him out of reach of your attacks. Attack the tree to bring it down with him. Defeat Yoritsuna to conclude a simple battle.