Mount Osore is a volcano found in the center of the Shimokita Peninsula of Aomori Prefecture. It is an object of Japanese mythology (literally meaning "Mount Fear") in which Osore leads to the entrance of Hell; a small brook nearby is said to carry deceased souls to the afterlife. When you first arrive to the battle, you should notice cairns and pinwheels left by parents with hopes that their deceased children will make it to the afterlife safely. In keeping with the tradition of the mystical volcano, the area's warlord is not a normal man; he is a practitioner of necromancy, reviving his dead soldiers to fight battles once more. 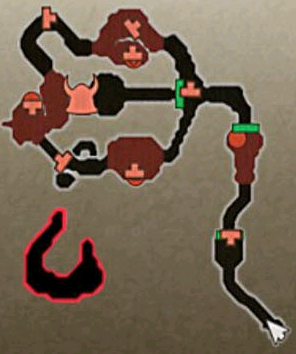 A map of Osore showing the hidden Resurrection Path.

Despite its insignificance in the game's main story, Mount Osore is a challenging battle to face alone. Stop by your first gate to find out why. The path through is guarded by a heavily-armored Squad Leader. Attack the soldier to remove layers of armor and get his health down, but watch out for his spear. Get hit by it and an orb will arrive to take away a great deal of your health, leaving until it comes back around to transfer what was once your health to heal the Squad Leader. This can turn into a frustrating cycle until your dangerously low on health; the Squad Leaders here can take as much health as they need until they're back at maximum health. Dodge the spear every now and then, or use long-range attacks if you have them at your disposal, to defeat the Squad Leader and open the gate.

Now you'll come across the first camp and another gate. It's a camp of dead soldiers until they're all revived by the incense dispensers. Destroy the source of it to stop the flow of enemy soldiers, and attack the Camp Commander to take the camp. The Camp Commanders don't have the same power as the Squad Leaders, so this should be simple enough. The following gate will open and another Squad Leader will arrive to greet you. Defeat him and take either the left path or the right path. Here, there are three camps and a gate. Take all enemy camps to gain access to the area warlord. All camps here have incense dispensers and an abundance of Squad Leaders (the right camp has three while the left camp has two, unless the Squad Leader from the final camp arrives to bump that number up to three). Follow the left route to find a ledge leading to the Resurrection Path, netting you a Special Reward. There are Squad Leaders guarding the path here, but defeating them isn't necessary.

Taking every camp will result in the opening of the center gate and the death of any Squad Leaders which you haven't yet defeated. Go back to the newly-opened path to meet up with Harumasa Nanbu, the area's warlord. 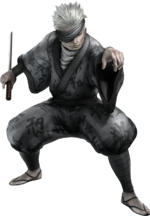 This is the boss you've been saving your BASARA and Hero Time gauges for. Surrounded by deadly Squad Leaders which he can revive at will, this battle is a tough one. Don't bother attacking his heavily-armored cronies. Focus your efforts on the man behind their revivals. His attacks themselves are a bit weak, his strongest one being a blue fireball which he lobs at you. Corner him until he jumps back up to his initial position and resurrects his Squad Leaders. This can be prevented by defeating him quickly enough, earning you another Special Reward; while this can be challenging if he uses his BASARA attack before you can continue the assault, stay close to him and use the crates scattered around the battlefield to fill up your BASARA gauge once more.

The ultimate dangers here are getting cornered by his Squad Leaders and Ninjatō/fireball attacks. His attacks are fairly quick, and his hit chains can leave no room for your offense if he so desires. Utilize parries, dodges, and guarding whenever you get the chance. Someone like Yoshitsugu Otani, whose attacks target many soldiers at once, would be useful here.