Odawara Castle is currently under the hold of Ujimasa Hojo, a weak man with an army that has lost many battles in the past. However, due to the desperation of his circumstances, Ujimasa has decided to hire some protection. Kotaro Fuma is a mysterious and legendary ninja who happens to work for whoever pays highest, and has recently been hired by Ujimasa to turn his luck around. Despite his terms, Kotaro is loyal and powerful, and must be taken down before facing the area warlord. 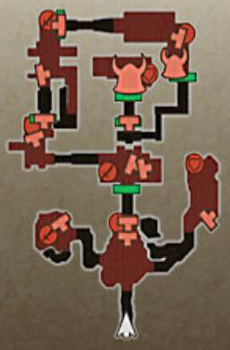 From the start of the stage, there are two options: take the first camps to unlock the first gate, or take all three available camps within the first two minutes to unlock a secret gate by the eastern camp. Unlocking the secret gate earns a Special Reward. Take the secret route to begin a new mission that involves sneaking up on Ujimasa from behind. To do this, you must travel along the rooftops, using zip lines and catapults to get across large gaps and performing running jumps to get across smaller ones. Be careful when fighting enemies here; squads of ninja, elemental or otherwise, will occasionally hop onto the scene to disrupt your advance. Losing balance and falling down below isn't difficult when in the middle of a battle, so don't go out of your way to fight any ninja in danger of falling off and do not pursue. The final catapult takes you to the sub-boss, Kotaro Fuma.

Kotaro is extremely quick and will do all he can to get you caught up into an air combo. The arena isn't very large, so the best strategy here is to corner him. Defeating him will open up another gate which leads to the final camp. Ujimasa will be surprised by your arrival and will have none of his squad leaders at hand to aid him. Defeat him before they arrive to earn the second Special Reward. Alternatively, wait for them to arrive and take all previous camps along with the final one to obtain more experience. 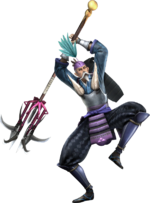 Depending on which strategy you take, this battle will play out differently. If you took the rooftop route, Ujimasa will be accompanied by some foot soldiers and a stationary camp commander, with the squad leaders eventually arriving if you don't defeat him quickly enough. If you've taken the straight ground path to Ujimasa, he will expect your arrival, but this also means you can take out his squad leaders before even beginning the battle with him. If this battle gives you difficulty, weigh your options and go with whatever strategy suits you best.

Ujimasa Hojo himself is not a difficult boss, especially after facing Kotaro. His attacks aren't anything special bar the ice effects some of them have, and his Basara attack is especially slow and easy to avoid.