Sekigahara: Ultimate is the final stage on Yoshihiro Shimazu's and Yukimura Sanada's red routes. The final boss is Ieyasu Tokugawa, who has formed strong alliances in order to finally unify Japan and end the Sengoku period. 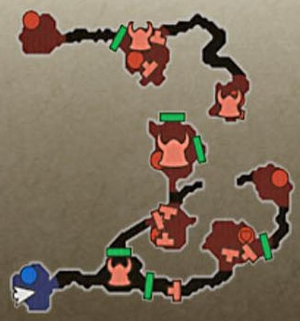 The first Special Reward requires you to watch Ieyasu escape on a zipline; this can be done by first chasing and defeating Tadakatsu Honda. Tadakatsu will be waiting at the clearing right at the start, but will mysteriously run off to protect a gate. The map attempts to dupe you into thinking Ieyasu is up in the opposite direction, with the final boss symbol showing up by an early camp. Of course, this is not the case; approaching the faux Ieyasu will simply lead to a scene in which a tricky duo of "shadow samurai" will reveal themselves. Instead, go after the smaller boss in Tadakatsu, defeat him, and the gate will open, forcing the real Ieyasu to escape and earning you a Special Reward.

The second Special Reward involves going after Masamune Date's right-hand man, Kojuro Katakura, before defeating the One-Eyed Dragon himself. If Masamune is defeated, Kojuro will flee the battlefield, so make sure you approach Kojuro's camp first. Defeat him for another Special Reward. At this point, you can continue on taking camps down the map and take on Masamune Date. Once he's defeated, Ieyasu is all who remains. Defeat the leader of the Eastern Army to halt their rise and name Mitsunari Ishida the victor of Sekigahara.