Sekigahara: Betrayal is the final stage on Ieyasu's and Kotaro's red route. The final boss is Mitsunari Ishida, Ieyasu Tokugawa's biggest opposition. The stage begins with Hideaki Kobayakawa fretting over whether or not he should betray his current alliance with Mitsunari to join with Ieyasu, whose ideals he favors. However, it appears he is now questioning his desire to defect. As Mitsunari berates him for even attempting to do such a thing, it's your job to step in and bring Hideaki over to the Eastern Army. 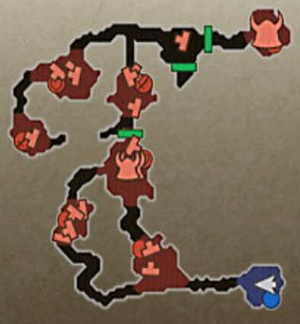 A short way in, you will be given an objective: lead the Arquebus Corps to higher ground, giving them the opportunity to stop Hideaki's indecisiveness by attacking his camp and thus showing their power. Take the left path first and stop at the X mark on the map to have the gunners shoot at Hideaki. After the scene, if you went to the X mark before taking the camp to the right and moving up from there, there won't be any battle to be had here and you will earn a Special Reward. However, if you did the opposite, progress forward to face the first boss: Hideaki's loyal yet mysterious ally, Tenkai.

Defeat Tenkai if you weren't able to convince Hideaki to defect to open up the gate leading into the next camp, which has an incense cannon in place of an enemy general. Take the camp, then take the camp at the left route on the next branching path to stop the cannon and earn a Special Reward. Continue on to battle Osaka's Death Carriage. After it's defeated, Yoshitsugu Otani will arrive as the last line of defense to his leader. Defeat him to open up the gate leading to the final camp and Mitsunari Ishida. This battle is similar in all ways to the final stand against Mitsunari in Osaka: Winter, right down to the camp off to the side, so it shouldn't be anything new.