Sekigahara: Ultimate is the final stage on Keiji Maeda's and Magoichi Saica's blue routes. The final boss is Ieyasu Tokugawa, the ambitious man who plans on unifying Japan under his rule. 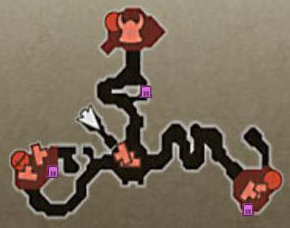 This map isn't very large, mainly consisting of running between the three camps while fighting enemy generals. At the camp to the left is Kotaro Fuma, and at the camp to the right is Yoshiaki Mogami. Partway into one of these attacks, Tadakatsu Honda will begin charging up his lightning rod. Like in the Cliffs of Mikatagahara, Tadakatsu will shoot lightning down at you as you fight. The only way to stop him is to take the marked camps. Defeat both Kotaro and Yoshiaki and take the camps which they protect, then move on to the final camp. There, you'll face off against Ujimasa Hojo. Defeat him and take the camp for Ieyasu Tokugawa to make an appearance (note you can use the catapult here for quicker access to the final boss).

Have your health never drop enough so that your general is near death (when the health bar flashes red) the entire stage, right up until Ieyasu is defeated, for the first Special Reward. The second is a bit trickier; when Ieyasu's health drops low enough, Tadakatsu will arrive to help him out. Defeat Tadakatsu before defeating Ieyasu for the second Special Reward, as defeating Ieyasu will end the stage. Lure Tadakatsu away so that you don't accidentally knock Ieyasu out, but also don't let your health drop in the process to complete the stage while obtaining both Special Rewards.