Hasedo Castle is led by the area's warlord, Yoshiaki Mogami; a man not above using tricks to get his way. Your goal here will be to defend the boat carrying your troops across the waterways by defeating Camp Commanders who order firings on the boat and opening water gates, until it can dock past the main gate. In addition to a boss at the end of the stage, you can also fight a secret boss for a Special Reward. Obtaining both Special Rewards is challenging here (especially on the game's hardest difficulty), as both put you under a serious time limit. 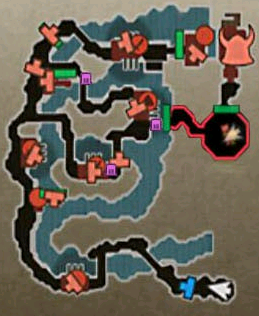 A map of Hasedo Castle, with the blue paths representing waterways.

For the Special Rewards, you may want to consider rushing through this or playing cooperatively. Reach the first camp to see a scene showing Yoshiaki's heavy artillery, aiming right for your boat. Defeat the Camp Commander quickly and move on. You can also decide if you have time to get rid of the Squad Leaders; risk losing time or losing your camp. Take the next camp to open a gate. Spend too much time opening said gate and your army's boat will end up having to go around the long way, risking the state of the boat. It has to take absolutely no damage for you to earn the Special Reward, so spend an equal amount of time at artillery camps and gate camps. The next segment of the battle requires taking a total of four camps to open Mogami's main gate; get the boat through this part unscathed and the Special Reward will be yours.

At this next artillery camp, you'll have a choice to take a secret route to the right for the stage's optional boss, the Drillatron. It's basically a vehicle which is led by two giant power drills, using them to drill into the ground and deal some damage. Unfortunately, the second Special Reward isn't as easy to earn as defeating it. You'll have to defeat it in a minute or less to earn the Special Reward. Now would be a good moment to activate Hero Time; you'll have a hard time keeping the vehicle in place otherwise. Once that's done, head back to the camps, taking the final enemy camp to earn entry to the area warlord. You can either do this or take the path cleared once the Drillatron is out of the way to attack Yoshiaki. 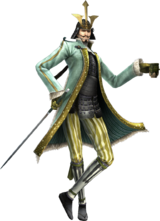 Yoshiaki is a cunning general of the Eastern Army, using tricks and shortcuts to get his way. He prefers to think of himself as an intelligent nobleman and wields a rapier in battle. His attacks consist of leaping thrusts and slashes. He even attempts trickery when he puts on a begging act, only to bounce back up with some powerful slashes when you get close. When he uses his BASARA Art, he goes into a frenzy and spins with his sword into a tornado. Despite his skill, Yoshiaki isn't a tough person to defeat. Not many of his soldiers should wander into the arena to get in your way, so just combo him into a corner and lay on the BASARA.

Once you defeat Yoshiaki, you might just free Matsu of the Maeda Clan. As it turns out, Yoshiaki blackmailed Toshiie Maeda into fighting for the Eastern Army by kidnapping his wife. If you take the right route, this turns out being a central element of Keiji Maeda's story. Whether you wanted to rescue you her or not, you'll earn her thanks before leaving Hasedo.