In each route, as your general journeys across Japan, there is a possibility that your own base will be attacked. This is signified on the map by a lightning strike which sets fire to your camp. This will momentarily stop your journey so that your general can prevent the intrusion before moving on. 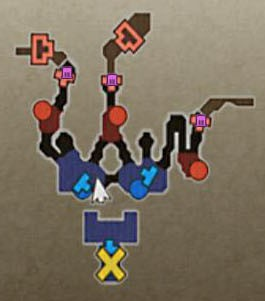 The objective here is simple: protect your camps from incoming squad leaders and the more dangerous occupational chiefs in the time limit. If you still have possession of your camp when time runs out, you win the battle. There are two camps for you to initially protect, though you may take the other three that the enemy have already taken by the time the stage begins; having all camps in your possession earns you a Special Reward. Once this is done, move back to the initial camps and simply take out squad leaders. Defeating 20 squads will earn you another Special Reward. If you have some spare time, at the end of the paths leading to each of the three camps is a Hatena Box (these are also fugitive locations). Partway in, suicide bombers will destroy the two walls between these three camps and enter through. Keep them away from camp commanders as they, along with the Occupational Chiefs, can be considered most dangerous.

If both initial camps are taken, two bridges will lower that will give enemy soldiers access to the final camp. Stop them from getting this camp in time or you'll lose the stage. If you're playing as a slow or low-level general, you may want to focus on protecting your camps instead of taking new ones.