From StrategyWiki, the video game walkthrough and strategy guide wiki
(Redirected from Sensha Senryaku: Sabaku no Kitsune)
Jump to navigation Jump to search 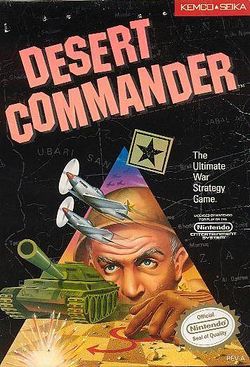 Desert Commander (戦車戦略 砂漠の狐, Sensha Senryaku: Sabaku no Kitsune?, "Desert Fox") is a turn-based tactics game developed by Kemco and published in 1988 for the Famicom in Japan. It was translated and published in North America for the NES one year later. It is based on the North African theater of World War II, and players can choose between the Allied Forces of Generals George S. Patton and Bernard Montgomery and the Axis Powers of General Erwin Rommel.

The player's force consists of nine different types of units and one headquarters unit (which is a unit by itself and also can be used to attack). Each scenario gives a different set number of units to use, which the player can mix and match between the different types without going over a unit limit. When in a one-player game, the second controller can be used to modify the CPU forces. When playing against the CPU, the computer will be given a different ratio of units to command than the player. On the easiest scenario both the player and the CPU have the same amount of units, on all others the CPU will have more than the player. There is no variance in artificial intelligence, so the only thing that makes the later maps harder is the larger number of units the CPU has.

The game is turn-based with no time limit. The object of the game is to destroy the enemy's headquarters unit. The player that does so first wins. Units have different mobility range, which varies according to the unit type and (except for aircraft) the terrain. They also have different shooting ranges, though this is not fixed and depends on the terrain. All unit types have limited ammunition and fuel. In order to replenish them the player must land them at the appropriate buildings or be resupplied by a supply truck; for example, all aircraft must stop at an airport in order to recharge their fuel and ammo supply. Each unit is particularly strong or weak against other particular units, performing average against all other types.

World War II began when the German army of Adolf Hitler invaded Poland through the use of the infamous blitzkrieg technique. By June 1940, France formally surrendered to Nazi Germany; making them the strongest nation in Continental Europe.

Benito Mussolini, the dictator of Fascist Italy had signed a military alliance with Germany at the time. He looked at this opportunity to transform the Mediterranean Sea into an "Italian Lake." Axis forces managed to deliver their invading troops to Egypt by September 1940. However, the Italian army was instantly defeated by the British defenders who had a duty to protect Egypt. Germany was determined to help Italy win their conflict while preparing for their fateful campaign in the Soviet Union at the same time.