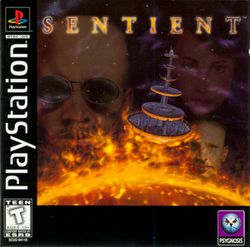 Sentient is a first-person Adventure and space-ship Simulation game released for the Playstation and PC by Psygnosis. The game takes place aboard the ICARUS, a fully-autonomous multi-deck space-colony ship tasked with mining high-energy particles, known as Kenyons, from the surface of the sun, Xexor; however, a series of intricate plots and conspiracies threaten to send the ICARUS hurdling into the sun, killing its entire crew and dooming humanity as a whole.

Events play out in real time as the player, controlling Garrit Sherova, must utilise the game's unique and ambitious free-form dialogue system to gain an understanding of the station's interdependent systems, and the happenings of its crew, to solve problems and avert the coming calamity.