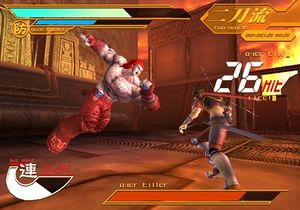 Natoe encounters the powerful Zex in the Overture Chapter.

While the story is based on the film Seven Samurai, its story and plot have more in common with its animated counterpart, Samurai 7. The game storyline is divided into "chapters".

The game begins as a young samurai known as Natoe is passing through the town during the humanoid invasion of the city. He encounters some enemies and a Humanoid named Zex. Thus begins Natoe's adventure.