Shadow of the Ninja

From StrategyWiki, the video game walkthrough and strategy guide wiki
Jump to navigation Jump to search
Shadow of the Ninja | Table of Contents | Gameplay | Walkthrough 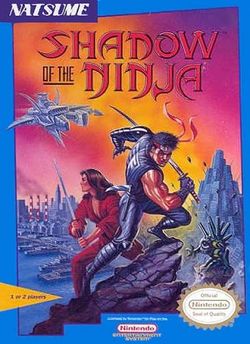 Shadow of the Ninja, originally released in Japan as Yami no Shigotonin Kage (闇の仕事人 KAGE: The Dark Professionals) and later released in Europe and Australia as Blue Shadow, is a side-scrolling action game developed by Natsume for the Nintendo Entertainment System (NES) in 1990. The game revolves around a pair of ninjas sent to assassinate a dictator in a futuristic version of New York City. A port was planned for the Game Boy, but was released in rebranded form as Ninja Gaiden Shadow.