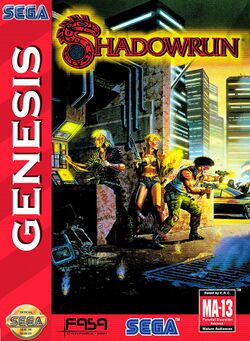 Shadowrun is a 1994 action RPG for the Sega Genesis based on the popular Shadowrun pen and paper system. Unlike the Super Nintendo Shadowrun the game employs a free-roam game world and even more RPG elements. Also unlike the SNES version, the player can recruit two other shadowrunners to fight alongside him.

The game begins with the main character, Joshua, spending the last of his money to track down his brother's killers. He finds the motel where he had been staying, but his brother had outstanding debts and the owner refuses to give up his possessions until the debts are paid off. This immediately leads the player right into the action; once outside the motel there are enemy gangs roaming the streets who will quickly kill Joshua without hesitation.