There are a number of Arcade Games that can be played in Shenmue, although not for free. They'll all cost you ¥100 for the pleasure, and if you do well enough on the You GAME Arcade's machines you'll walk away with a special prize for each of them.

Located on the main street in Dobuita, beside Suzume Park.

Press the A button to throw the dart. Ryo's hand moves in an almost random pattern. The faster you throw the dart, the higher your Time Bonus will be. If you beat 120 points in the first game you can get a second game for free. A total of 240 points after the second game will get a third round for free, and the arcade owner will give you a Darts 7 capsule toy as a reward. 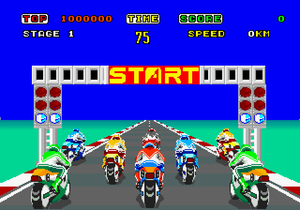 Accelerate with the R-trigger, and steer with either the analogue stick or the D-pad. The goal is to make it past each successive checkpoint within the allotted time.

If you complete the game with only one credit, you'll get a Hang On capsule toy as a reward from the Arcade owner.

Move with the Analogue stick to avoid obstacles and enemy attacks, and fire with the A button.

If you complete the game on a single credit, you'll get a Space Harrier capsule toy as a reward from the Arcade owner.

Punch the rising targets by pressing the appropriate button as quickly as possible. Miss three targets, and it's game over.

Press the controller buttons that flash on the screen as fast as possible. The game speeds up gradually as it progresses.

Just off the plaza beside Warehouse #18, the Harbour Lounge also has a Jukebox, two Capsule Toy machines, a drinks vending machine and a small Tomato store.

Exactly the same as the Darts 7 in You GAME Dobuita, except you don't get the prize if you get all three games from a single ¥100-play.

Similar to Darts 7, press the A button to release the dart. The hand movement is somewhat more predictable on Neo Darts.