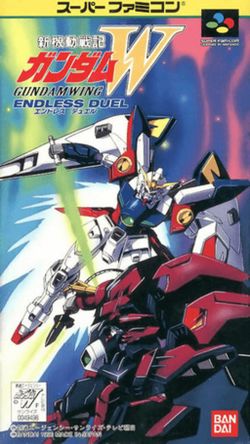 Shin Kidou Senki Gundam Wing: Endless Duel is a fighting game released exclusively in Japan in 1996. It was the first video game to be based on the Mobile Suit Gundam Wing anime series, and has never been released outside Japan. The developers have used the same engine as previously used in another game, Mighty Morphin Power Rangers: The Fighting Edition, but with some improvements added exclusively to this game.

Upon completion of the game on the 'Hard' difficulty level, the player will learn a code to unlock Epyon in multiplayer mode. In addition to these modes, a further 'trial mode' was added, in which you can choose any Gundam (including Epyon) and fight a never-ending series of fights in increasing difficulty until the player is defeated. Afterwards the game would show the number of victories won. The maximum number of victories shown possible is 99.

Since every character is a mobile suit, during game play, it is possible to activate a booster at any time. While jumping, a player could boost up to twice and could be used to jet forward or backwards. This along with air blocking made air combat much more significant than in other fighters of the day. After boosting in the air a player can "hover" by pressing down. The Tallgeese mobile suit has the unique trait of being able to "hover" the longest. Because of this, Endless Duel was an early example of a fighter that included vertically scrolling stages. The boosting also works on the ground as players could boost forward or backwards while blocking which made for effective advancing against an opponent with superior ranged abilities and adds an incredible sense of mobility. Also, several suits in the game can perform special and super moves in air along with air throws.

Gundams each had different Ability Ratings, mirror to the ones in the show. Playable suits include all five of the original Gundams, as well as the later Gundams Wing Zero and Epyon, and the mobile suits Tallgeese, Mercurius and Vayeate. Other suits from the series make appearances in the backgrounds of some stages.

During a match both characters have an energy counter underneath their health bars. The energy is used to perform powerful versions of special moves costing 100 of your energy. All characters with the exception of the boss Epyon have a "vulcan gun/machine cannon" attack which also uses energy. Every character has one or two super specials that require 200 energy and plays a sound right before commencing giving the opponent a split second to respond. To recover energy the character must block attacks or successfully land attacks meaning a super special that is not blocked will often restore a large portion of the energy it used.