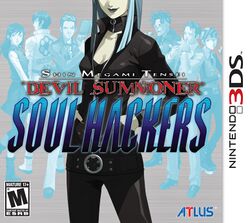 Amami City. A supposed technological utopia; a city entirely connected to one computer network. A city dreamed up and created by the computer software developer Algon Soft. You, a member of the hacker group "Spookies", live in Amami City. One day, "Spooky", the founder of the group, shows up with an odd PC (shaped like a gun) he purchased from a local pawn shop. Little does he know, the PC carries a very dangerous secret...