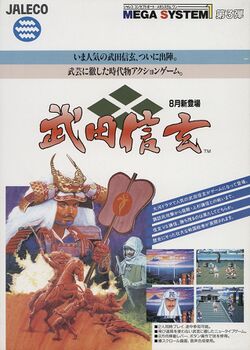 Shingen Samurai-Fighter, known in Japan as Takeda Shingen (武田信玄, Takeda Shingen?), is a samurai themed beat 'em up developed for the arcade and produced by Jaleco in 1988. It features the eponymous daimyo, or warlord, Takeda Shingen as he makes his way across various areas of medieval Japan combating all who oppose him with his katana, embarking on a grand journey to defeat Uesugi Kenshin. The arcade game allows two players to play simultaneously, and has three buttons. Two buttons are used to attack in different directions, one to the left and one to the right. The third button is used to jump.

Takeda Shingen was one of the most powerful daimyō with exceptional military prestige in the late stage of the Sengoku period. Shingen was a warlord of great skill and military leadership. After conquering Shinano Province, Shingen faced another rival, Uesugi Kenshin of Echigo Province. The feud between them became legendary, and they faced each other on the battlefield five times in the Battles of Kawanakajima.

The game was converted for play on the PC Engine and published by Aicom in 1989. However, this is not a straight port. While the core fighting mechanic is largely unchanged, the layout of levels and presentation of bosses has largely been altered. More RPG elements like experience points have been introduced, and fallen foes drop money which can be spent on upgrades and health recovery items between levels. The two player co-op aspect was removed, and the game was made a single player experience only. As the PC Engine only offered controls with two buttons at this time, the two attack buttons were reduced to one, and Shingen attacks in whatever direction the player is facing.