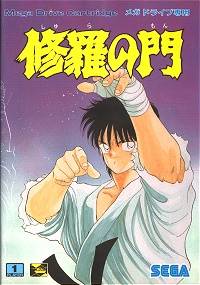 Shura no Mon (修羅の門, Shura no Mon? Shura's Gate) is a strategy game based on the Japanese manga series of the same name. It was released for the Sega Mega Drive in Japan on August 7, 1992. The story centers around Mutsu Tsukomo, a fighter who has mastered a dangerous technique. The game begins with the announcement of a tournament open to all fighting organizations in order to determine the strongest fighter in Japan. Tsukumo, eager to test his skill against any discipline, enters the tournament. However, as the favorite to win is a man open to murder, Tsukumo will have to prove to his dojo and himself that he isn't in over his head.

Shura no Mon is a straightforward strategy game, incorporating limited movement in action phases and menus in battle phases. Battles are split by story scenes, with characters communicating through text boxes in various environments. Clear battles by draining the opponent's HP to advance the story and progress to the next battle. While there are no breaks between battles and story scenes, passwords obtained after each battle can be used to return to any point in the game after exiting.