Silent Assault is an unlicensed game created for the Nintendo Entertainment System published by Color Dreams. It was developed and released by Thin Chen Enterprise under two names: Sachen for its 1989 asian release, and Joy Van for its 1990 North American release. 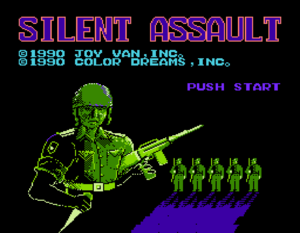 The game uses palette swapping (different looking enemies that behave the same way) in many of the levels to minimize the number of unique enemies in the game, but give visual differences. These changes are usually made to fit the theme of the level (i.e. the theme park has clowns instead of soldiers).

"A sinister alien power has taken control of the Earth's military forces. Chosen by fate, you are the only person that the interstellar demon creatures cannot possess. Engage enemy infantry as you gather additional armament. Infiltrate a besieged city to secure the heavily guarded munition factory and nuclear reactor. Engage bizarre creatures from the scorching desert to the dark and forbidding forest. It's a race against time, and your time is almost up."

"Jason is a member of the guerilla. He drives the glider landing the dangerous zone in the jungle. His mission is to occupy the military post and save the captive. You must seize weapons from the bandit to repay evil with evil. Look out the land-mine also and do not suffer a setback due to careless. Come on! No pains no gains, you will win the final victory."