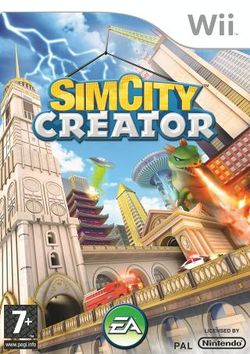 This guide is for the Wii version. For the Nintendo DS version, see SimCity Creator (Nintendo DS).

SimCity Creator is the latest game in the SimCity series by Electronic Arts, released for the Wii in September 2008.

SimCity Creator follows the basic SimCity formula that sees players managing a city and placing residential, commercial and industrial buildings in addition to facilities such as police stations, hospitals and stadiums. However, players will also be able to customize the look of their buildings by choosing from several themes including Egyptian, Roman, Japanese, European, Las Vegas and near-future styles, in addition to ones that result in a crystal or confectionery-like appearance to buildings. Players will also be able to tour their city, rendered in 3D graphics, in a helicopter or airplane.

Taking advantage of the Wii, the pointer function of the Wii Remote will be used to directly draw roads and train tracks onto the map. Cities can also be shared among players through WiiConnect24. Similar to SimCity 4, Creator will feature a day and night cycle, as well as a seasonal cycle last seen in the SNES version of SimCity. Players will tackle disasters including dinosaurs, giant robots and meteor impacts.