Build a massive industrial powerhouse of Productivity where crime and pollution are irrelevant nuisances and citizens are replaceable tools.

The Industrial Revolution is upon us, and with it a new decade of building power and industry on the sweat of working Sims. Unfortunately, this power comes at a price. As if having to worry about labor unions, strikes, and labor costs wasn't enough, crime is on the rise and day seems like night with the smog choking the air. Bearing these burdens, lead this city -- and SimNation -- into a glorious new age of history.

Assembly Required is a good scenario to try the new challenges that bring the maintenance costs to the game as many of the budget strains will force you to expand methodically and avoid expensive daily overhead costs. Starting up the city may be a little tricky, but often once it starts rolling it becomes a cakewalk as industry kicks up the budget. As with many SimCity Societies scenarios, you can win this scenario with different city plans and building mixes, however they'll look pretty similar as the industrial filter is on.

Important things to keep in check in this scenario are: 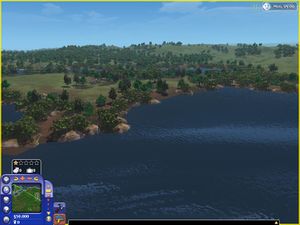 A rough coast, which adds a small challenge.

The terrain setting of the city will have a good amount of water and some rough little hills. Don't try to build the whole city in one huge block, probably the city will have to split itself in several neighborhoods to fit between the hills and the water.

The benefits of an eyesore city strategy[edit]

As always in SCS, the first thing to do is to build a power plant. In this scenario only Coal Power Plants and Coal Super Power Plants are available. As a rule of thumb, this kind of power plant is better placed in the farthest corner of the map, however in this scenario it won't matter at all if you put it near the worker houses, as most buildings here will be eyesores anyways.

Usually, eyesores are ugly buildings that lower other, surrounding buildings' happiness. However, this effect does not cumulatively lower the happiness of other nearby eyesores. For example: the Coal Power Plant lowers the happiness of the strip mall from +3 to +1 if it's in the influence area of the plant. However, a little butcher shop in the same location does not get the penalty. The same goes to all buildings with the shanty (eyesore) icon in the building card. This is mean that eyesore housing can be placed next to other eyesore venues, aside from eyesore workplaces, and none of them will harm the status of the others. This eases a lot the space and traffic problems, as neighbourhoods can be compact and in walking distance of everything. Many eyesores have low maintenance costs, so they are very good buildings to help get the city started.

Poor but honest: why slum apartments are not good[edit]

So the first objective recommendation is to skip slum apartments, Slum Apts. These are dirt cheap to build and maintain and they are space efficient, but they attract crime. Crime is the true cancer of the cities in SCS and a difficult element to manage.

Crime means that pickpockets (thieves) will appear, which lowers the happiness of the worker sims in the area. Worker sims, like real people, can become overly stressed and cause problems for your commerce by shutting down businesses. Often sims can handle a few downers without going rogue, but putting them all together is asking for it. Also, trying to fight crime by force is expensive: those policeman won't pay their own upkeep. Also, riot police from jails are even more expensive. It is much more efficient to cut police costs by keeping honest law-abiding worker sims rather than a police state (at least at this point; later on you will need their assistance to balance out a city).

After discarding the slums, we have the next housing options available for our workers:

The next ones aren't readily available but are easy to get:

The last ones, the workers barracks, they have huge build and maintenance costs, and are far away from starting options. They also pack a lot of workers into one space. In strategic mode these are a very bad housing option and too expensive in many ways. 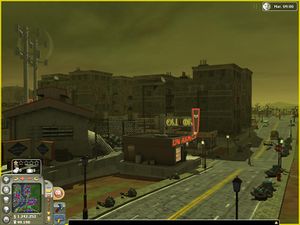 In the corner was a butcher shop, but now there is a liquor store.

There are many options of industries to start with: sawmills, breweries, and gas stations (old-fashioned ones). However, one of the best options is textile mills. They have a 7-day workweek, so overhead/profit balance is evenly distributed over all the weekdays so there are not weekend deficits as in 5-days workweeks. Also the textile mill has the production drive action, which gives lump sums of cash almost every week.

However the textile mills aren't so good for the worker's welfare, the 7-day week means no weekends at all, and power looms have the nasty habit to snap fingers and legs of worker sims. As for the entertainment of the toiling masses there is nothing like booze and gambling, however remember to keep it nice and legal. The first option which comes to mind for this cities are the dive bars. These might be nothing like having local beer on tap and a football game on T.V., but, unfortunately, these proletarian venues have the same problem as slum apartments as they attract crime and crime is bad for the industrialist's business.

So, search for more established ways to wet the thirsty workers' throats. Often liquor stores will do very well (+5 drunk status) but need some small requirements like an established population and some productivity value already running. Off-track betting offices will provide some good leisure (+5 happiness) to the masses and also will shelter some drunks in the cold nights of your city as they don't close in the nights.

To give or not to give: if healthcare and salvation are needed[edit] 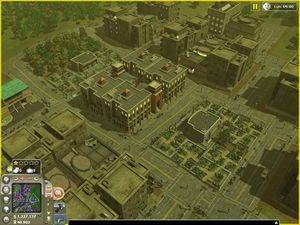 A charity quarter in a miserable town. Look at how the sad gardens and parochial schools form a "perimeter" to avoid the eyesore penalty to the churches and clinics.

It's perfectly possible to run this scenario without any healthcare facilities. However, it adds a bit of extra difficulty as injured and sick sims are more cranky than healthy sims. In real industrial cities sooner or later some altruistic-minded people start to care about the bleak lives of the working people and begin to set up charities, free clinics and other things to help others.

A good charity combo in this scenario are parochial schools, clinics, and churches. In this childless city (unless you make victorian homes), the parochial school is a relatively cheap source of knowledge and spirituality. Two schools easily give enough values to run two clinics and one stone church. Surprisingly, one of those meager combo facilities can in fact liven up a population of around 60 sims easily (of course, that is counting on the presence of the standard booze and gambling venues in the area too). In fact, thanks to these "Charity Outposts" the mood of the sims can stay very high, even with the rampant sickness and bleak housing.

As the parochial schools often won't find any visitors at all (because the sims are too busy drinking and gambling) in this combo, they tend to look and work more like value-giving decorations rather than educational venues, so it's wise to put them between the slums and the churches and clinics perimeter to save up space and keep them untouched from the eyesore penalty. Churches have a +10 happiness effect, which gives them their usefulness. This bonus will remain intact if protected from eyesores. If the church's effect is diminished, essentially it is worthless, so don't let that happen!

The early game is characterized by a tight budget because most industrial workplaces have expensive build costs (not as expensive as the skyscrapers' offices, but expensive for a limited budget). However it's safe to assume that you've reached the mid-game when the budget starts to feel less stretched. This often happens around the 6th or 8th textile mill. Then you can start to focus on bigger and more profitable industries. Warehouses, sweatshops, or steel mills are good choices. Every new factory not only costs the build cost but also the housing and venues needed, so always keep a cushion of money before building each new factory.

Not only do the industry's big players come to the town as it grows, but also the entertainment big players arrive. One of the best all around venues of the mid-to-late game are the underground casinos: they have a hefty initial cost and are quite big compared to the previous venues, but entertain a lot of workers giving them all the gambling and bootleg liquor they want at a 24/7 service and with an excellent daily cost for the city. Due their similar size to tenements, they mix pretty well and it's recommended that you use them everywhere you can to provide some recreation for your workers.

When your first steel mills start to bring benefits, it's a good moment to pursue upgrading to the colossal foundry. From there you can focus on winning this mission. The budget at this time should be healthy and growing with the big industrial profits, letting you easily to expand the city to the required size.