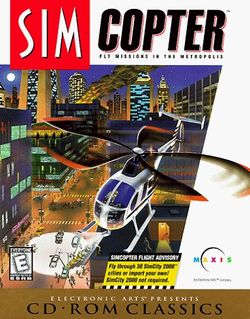 As the name implies, SimCopter puts the player in the role of a helicopter pilot.

There are two modes of play. The free mode lets the player import and fly through cities of their own or any of the 30 cities supplied with the game. However, user cities sometimes need to be designed with SimCopter in mind, and most of the time the player must increase the number of police stations, fire stations, and hospitals to allow for speedier dispatches. The second mode is the heart of the game, the career mode. This puts the player in the shoes of a pilot doing various jobs around the city. These jobs include:

The player starts with a small, weak helicopter, but as they accumulate money they can upgrade their existing helicopter and purchase new ones. Some jobs require certain equipment in order to complete them, and better helicopters offer greater speed, handling, and capacity. By completing jobs, the player earns money and points. When the player has accumulated enough points, the game lets them move on to the next city. The player then has a choice of going into a new city of the same difficulty or advancing to the next level. There are ten levels of difficulty, with new types of jobs being introduced and previous types of jobs increasing in difficulty.

The player is assisted by paramedics and police which will ride in the helicopter and can be deployed when necessary. The player can also dispatch police cars, fire engines, and ambulances.

There are five virtual radio stations that can be listened to while in the helicopter: classical, rock, jazz, techno and a mix station featuring all songs from every other station. The file format of the music is low quality WAV, and if a user wants, they can import their own music into the game as long as the music uses the WAV format as well.

The game became infamous when a gay designer inserted sprites of near-naked men kissing each other, which was caught shortly after release and edited from future copies. He cited his actions as a response to the "bimbos" within the game. Nevertheless, the designer, Jacques Servin, was fired.