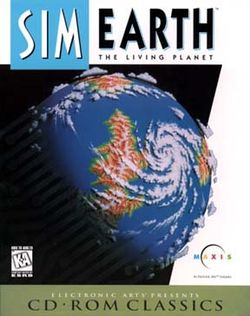 SimEarth: The Living Planet was published in 1990 by Maxis. A version was created for the SNES by FCI in 1992.

SimEarth is an interactive simulation in which you can mold and shape a planet down to every peak and canyon that you choose.

The beauty of the game lies within the fact that, unlike most games, there is no real objective or goal to attain. Thus, creativity can be prevalent, and possibilities are limitless.

In SimEarth, your planet has a life of 10 billion years, after which the sun supernovas, turning your entire planet to desert. Unlike the PC version, it is actually possible to continue playing beyond this point.

Placing objects and performing certain actions in the game requires energy, which is represented in omega units (Ω). Actions are carried out through a series of menus, which contain available options to use.

Throughout this guide, terms will be presented exactly as they appear in the game; for example "Alt" is used in place of "Altitude".