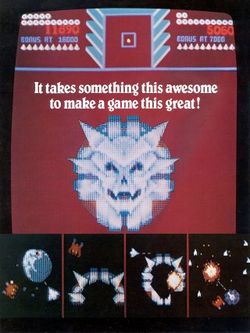 Sinistar is an arcade game released by Williams in 1982. At first glance, it appears to be an amalgamation of a few existing arcade games such as Asteroids and Defender. But only a few moments of play are necessary to see how intense and frantic Sinistar's unique gameplay becomes.

The player controls a ship with dramatically responsive controls, and guides it through space. A race is on between the player and worker drones to mine crystals from asteroids. Once the drones collect enough crystals, and Sinistar is fully built, the player must encounter and destroy Sinistar by unleashing the crystals that the player managed to collect, before being devoured by the monstrosity.

Due to Sinistars arrival close to the video game market crash of 1983, and perhaps due to its complexity, Sinistar saw no official conversions to home platforms until it began showing up in classic compilation titles in the mid 90s. Ironically, a prototype was developed for the Atari 2600, the least likely machine to port the game's intense gameplay to, but it was never officially released. 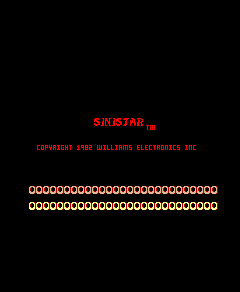 Your intergalactic crystal-mining mission takes you to the antipodes of the known universe. But your parametric DeepSpace scanner faithfully displays the sector of the galaxy you presently occupy (including an area fully 3 parsecs across, no less)!

Keep the galaxy safe for all it's sinizens! Fiendish Worker ships from the planet Sporg will attempt to fabricate a Sinistar from the remains of derelict planetoids in your very sector. You must not let them do this for two reasons :

You must mine the Sinisite crystals. Williams has equipped you with the latest heuristic electric cannon technology. All you need to do is aim at a planetoid and shoot. Now collect your motherlode!

In fact, only with Sinisite can you manufacture Sinibombs to eradicate the Sinistar. But you must also rebuff the Workers and disintegrate their even more aggressive comrades-at-arms, the evil skelomorphic Warriors! Intelligent beings everywhere depend on your courage, your dedication, your reserve, your shrewd command of tactical invention! It's up to you space cadet!