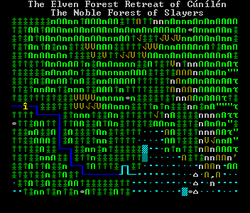 Slaves to Armok II: Dwarf Fortress is a freeware fantasy game combining the ASCII graphics of a Roguelike with the gameplay elements of a real-time strategy game. Unlike visually similar games such as NetHack, gameplay is in real time (but can be paused).

It's similar to Dungeon Keeper and Evil Genius in the way you manage your fortress, but its economy is as detailed as that of the Settlers series. The game also provides an "adventurer" mode that allows you to explore the world and your fortresses as a hero and his party.